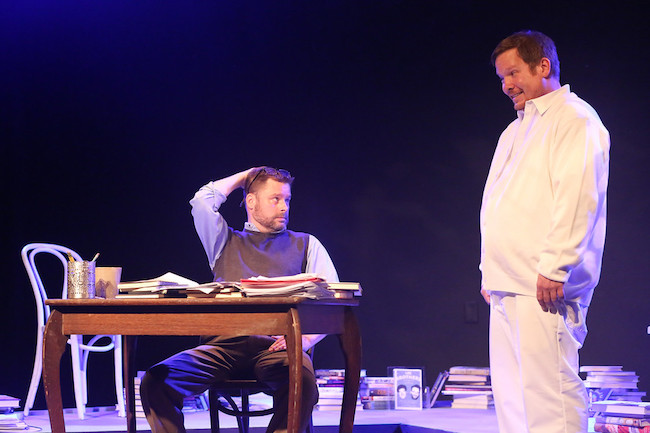 Love comes in many forms, with just as many different expressions. New Line Theatre opens its season with “The Story of My Life,” by Brian Hill with music and lyrics by Neil Bartram, is a little gem that celebrates friendship and the hidden benefits of marching to the beat of your own drum.

The musical, starring Jeffrey M. Wright as Thomas “Tom” Weaver and Chris Kernan as Alvin Kelby, with director Scott Miller on the piano, is a touching slice of life. The story covers big milestones and everyday occasions, happy and sad, with a touch of reality and disappointment for appreciation’s sake. Your interpretation may vary, but the show is filled with quiet revelations and gentle insights that lovingly reflect the complexities of friendship and love. So there’s room for lots of perspective.

Tom Weaver, a successful, best-selling author, is in the midst of serious writer’s block. Figuratively and literally. Figuratively, he’s stumbling as he tries to write the eulogy for his longtime friend, Alvin Kelby. Literally, Kelby and his father owned and operated a new and used bookstore named The Writer’s Block. That’s the spot his mind takes him to as he writes. The situation is funny, relatable and a fabulous jumping off point for this memory play of a musical.

Tom is our everyman, he fits in, but he’s not particularly popular or remarkable as a lad. He is a gifted writer and, when the time comes for him to write a story for his college admissions, he crafts a pretty tale about a butterfly. A tale inspired by a conversation with Alvin. He leaves town and gains fame and fortune; Alvin stays behind and runs the shop. They sort of stay in touch over the years, yet they’re distant enough that Tom isn’t sure where to begin or what to say about Alvin’s life and passing.

Tom’s memories of Alvin and the stories from their childhood are the prompts for this well-balanced memory play of a musical. There’s some really nice vocal layering on by Wright and Jones, and Miller knows just when to bring the piano in for a breath. Wright and Kernan are strong compliments and Miller shows just the right touch to find the light and humor, ensuring the show avoids maudlin overtones.

The songs are pleasant melodies that add emotional context and further the plot, with arrangements that suit Wright and Kernan’s voices. Their harmonies are pleasantly aligned but still distinct, at times creating a richer, more layered sound than typically expected from two voices. “Write What You Know,” “Saying Goodbye” and “Angels in the Snow” capture the story arc with pleasant refrains that linger. All the songs have a gentle melodic structure, with room to accommodate varying interpretations. There’s a compelling authenticity, and a real sense of being in the moment, to these songs, even when that moment is a memory.

There’s some really nice vocal layering on the part of Wright and Kernan, and Miller knows just when to bring the piano in for a breath. The use of repetition and echoing of major themes in song is effective, providing important emotional context and tone. Miller does a great job of selecting when to bring these motifs to the front and when to use them for texture and contrast. Wright and Kernan are controlled and clearly in tune with Miller’s direction and each other. The cumulative effect is greater than its parts, without losing the friend’s individual personalities and values.

For a story about death, centered on a eulogy, the show, continuing through October 23 at New Line Theatre, delivers a lot of joy and gratitude. The small, stage, designed by Rob Lippert, with lighting design by Kenneth Zinkl and props by Alison Helmer, layers on the comforting vibes. And the nuanced, personal performances by Wright and Kernan pay tribute to friendships and the shared experiences that form the stories of our lives. Affectionate and reflective “The Story of My Life” invites you in to Tom’s heart then wraps you in warmth like that first hug from a good friend you miss.