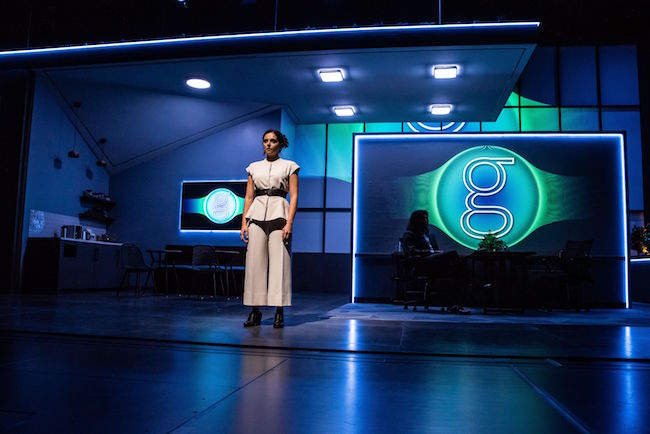 ‘The Gradient’ explores privilege and justice with biting satire that resonates

The world premiere of Steph Del Rosso’s compelling “The Gradient,” is thoroughly entertaining and presciently challenging, with a few sharp edges here and there to keep things real. Set in the near future, the provocative script imagines a world where men are held accountable for their actions and behaviors towards women. The Rep’s production is captivating, thought-provoking theater that’s sure to stimulate conversation.

Tess, played by Stephanie Machado, is a new employee at The Gradient, a business that uses a revolutionary approach to the reformation and rehabilitation of men who have committed a sexual offense. Society has determined these men must be held accountable. But the Gradient isn’t a jail; it’s an alternate program. The atmosphere is one of comforting cheerfulness coupled with an entrepreneurial “get it done” attitude. Not punishment, but acknowledgement. There’s an individualized path created for each offender, based on an algorithm, and the company boasts a high success rate. Though the men who come here have faced serious accusations, it is never implied that they -- or all men -- are bad.

Underneath the show’s veneer are serious questions about relationships and boundaries, as well as those gray areas no one talks about. One of the most visible explorations is Tess’s evolving friendship with her coworker, Louis, played with understated charisma and slacker posture by William DeMerrit. The assumptions and overtures here put a different lens on the conversations Tess has with her clients. The topic is current and relevant, and expertly reflected by the actors in scenes that resonate with realistic tension and context.

This is Tess’s dream job – she’s even memorized the algorithm. However, after learning the quirks of entering the data and dealing with several clients over the period of their stay, Tess begins to question the process. And, perhaps more importantly, its results.

One client in particular, number 5247, or Jackson by name, played with a suave charm and overconfident flaw by Yousof Sultani, shakes Tess’s blind faith in the company to her core. The observation that all her clients -- played with brilliantly seamless transitions by Stephen Cefalu, Jr. -- are affluent white men adds money and privilege to the equation.

The company culture stresses innovation over memorization, according to the director, Natalia. Played with the perfect balance of authority, command and a soothing voice by Cristina Acosta Robinson, she’s the enigmatic driving force of the Gradient, and her perspective is discomfiting and interesting. But, when Tess suggests an innovation, to factor in the authenticity of a response, her idea is brushed aside with a cursory reminder to ‘trust the algorithm.’ In a matter of weeks, Tess’s dream job has become a nightmare and she’s haunted by her questions. Are these men actually contrite or have they simply learned a new pattern for disguising their behavior?

The questions are relevant, the business model more than plausible and the performances are as riveting and nuanced as the well-constructed script. Tess’s ultimate reaction to 5247, and her questioning the algorithm, is satisfying and cathartic, if intense. Her co-workers’ reactions to her will hopefully nudge you to think on the show a little more. There are no easy answers here, not in contemporary society, mathematics or this imagined near future; but the questions merit exploring.

The script is satirical, and full of awkward comic moments that reveal uncomfortable truths. Among the most telling is Natalia’s caution against getting involved with your clients. Perhaps the most interesting twist is Tess’s own transgression, a spontaneous moment during an alcohol-fueled company Halloween party. Del Rosso gives this scene just the right emphasis, with sharp dialogue that shows more than it says. Powell shifts focus with purposeful intent, letting moments like this break out of the calm, positive veneer the corporation projects. The performances are drenched in authenticity, creating ripples of excitement and tension that help pace the show.

The set is a mix of contemporary, modern elements bathed in calming blue and green hues. The scenic design, by Carolyn Mraz, with lighting by Metly Couzin, sound by Sadah Espii Proctor and video projections by Kaitlyn Pietras and Jason H. Thompson, builds a world that feels tightly controlled and prescriptive, but not unpleasant. Natalia’s calming voice serves as a guidepost and transition, adding a complimentary layer with a smooth tone. The almost hypnotic effect of the Gradient “world” greets audience members the moment they walk into the theater. It’s subversively effective at setting the mood before the actors enter the room.

Like a beautiful dream, “The Gradient,” continuing through October 24, lulls you into the fantasy with just the right encouragement, then abandons you in the light of day. Del Rosso’s script and Powell’s approach mesh perfectly, resulting in performances that are relatable and sympathetic. The actors are believable and compelling, deftly conveying the levels of conflict in the satire. Machado is passionate and committed without cynicism, and she gets excellent support from a strong cast. The topic is certainly worthy of this deep exploration and the possibilities presented are both riveting and frightening.

The Rep’s premiere of “The Gradient” is the type of theater that stirs your blood and keeps you thinking and talking for days. If you relish that challenge as much as I do, this show is certainly worth your consideration.