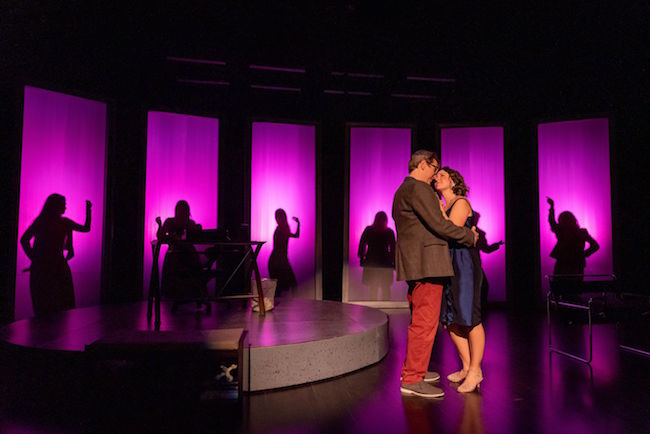 After a lengthy pandemic delay, Moonstone Theatre Company launches its inaugural season with a fabulously well-produced take on one of Neil Simon’s infrequently seen and lesser-known plays, “Jake’s Women.” Directed with an eye for every detail by Edward M.  Coffield, the show, though a bit of a folly, is entertaining and the intent pure affection.

Set in the early 1980s, the play introduces us to Jake, a successful writer played with a deft touch by Jeff Cummings. Jake’s 53, with a nearly grown daughter away at school and an ambitious second wife he is certain is about to leave him. Cummings and Coffield find ways to soften Jake’s ego and Cummings has a graceful humility about him that makes the character a bit more likeable. This helps contemporary audiences to accept the character's more insufferable tendencies towards grandeur as well as his dated attitudes.

After he and Maggie agree to separate for six months, Jake is left alone, perhaps for the first time, with only the characters in his head. Those "characters" are his mental re-imaginings of the important women in his life, whom he seems to summons at will just to hear what he wants them to say. With his life in a state of uncertain turmoil, he leans on these characters -- on his self-constructed version of reality -- even more. No matter how hard he tries, he can’t seem to write his way out of his current predicament. And he does try. But, will his internal dialogue help him when he and Maggie see each other again after their separation?

Jennifer Theby Quinn is captivating as Jake’s current wife, Maggie. Bursting with energy and frustration she’s also openly vulnerable and sympathetic. Maggie is seen both as a character in Jake’s head and as herself in real life, in their troubled marriage. Theby Quinn expertly glides between the two versions of herself, creating distinct interpretations of the same person. Like with identical twins, it may not be readily apparent, but once you see the differences they’re easy to distinguish. There’s a real fire to Maggie and also a lot of love for Jake, regardless of the current situation. Theby Quinn effortlessly shows us every emotional twist and turn while keeping Maggie grounded and dimensional.

In contrast, Marissa Puller is a radiant, loving force as Julie, Jake’s first wife. Her presence and demeanor are a constant source of warmth, and Jake is magnetically drawn to his vision of her. Karen, Jake’s nosy, doting sister gets a nice edge in Sharon Hunter’s performance and Jennie Brick has fun being wise and sassy as Edith, Jake’s therapist. Carly Uding and Amelie Lock subtly mirror each other (as Uding does with Puller), creating effective, connected expressions of the older and younger version of Jake and Julie's daughter Molly. These women are primarily seen in Jake’s mind, as characters he's molded and given his words to, not their own. Though at times they do mock and challenge his constructs. And finally, there’s Sheila, played with sincerity by Mindy Shaw. She’s real, presumably, and Jake’s new girlfriend.

As with the talented cast and skilled director, the technical aspects of the show set a high standard for the company right out of the gate. Set designer Dunsi Dai and lighting designer Michael Sullivan work in perfect harmony, and there are a few surprise moments that create gorgeous pictures for the audience, resonant with emotion. The finishing touches, adding period, tone and situational cues, are provided by costume designer Michele Siler, wig designer Dennis Milam Bensie, and sound designer Amanda Werre. The show is visually inviting and the pace clips along, making the two full acts run by quickly.

The performances are tight and well delivered, while mining every laugh possible, but the show leaves me wanting. And the script is the problem here for me. Even accepting that the language and attitudes reflect predominant 1980’s culture, the story feels self-absorbed and disingenuous. The humor and emotional pulls are made at the expense of the women, in part because of the controlling nature of the writer’s gaze. Even in the “real life” scenes, particularly the very cringy funny scene with Sheila, the women involved are there to satisfy Jake’s needs. The hopeful ending ensures the neurotic but funny man gets gentle comeuppance from women who deserve better than him but remain devoted. There’s not much growth, some of the jokes are terribly dated and the resolution feels rushed and a bit forced.

“Jake’s Women,” continuing through November 21 at the Kirkwood Performing Arts Center, may be a Neil Simon play, but it clearly isn’t his finest writing. The dialogue is witty and well crafted, but the characters lack some of the depth and kindness that Simon usually finds. Honestly, it feels more like a wish fulfillment exercise, possibly related to something the playwright was going through at the time? Fortunately, sharp direction that focuses on the humor and affection and engaging and well-measured performances keep the audience interested, hopeful and entertained.