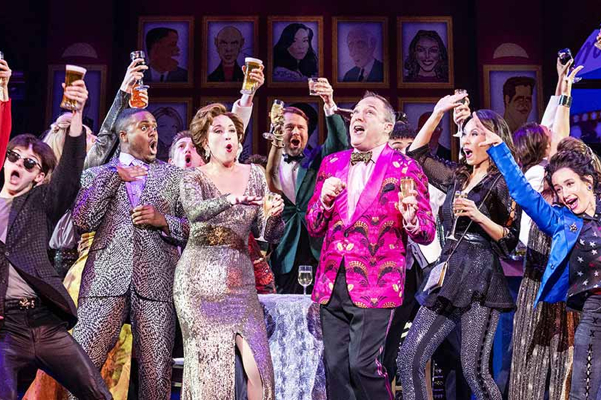 At the Fox, 'The Prom' revels in its superficiality...and it works

Throughout my life, I’ve tended to ask myself a question after having seen a theatrical endeavor—play or musical. That question is: as a whole, did it work? No matter the subject matter, individual scenes, the actors, the set and costumes, or what have you, as a whole, simply, did it work? Well, despite the fact that “the Prom” is more shallow than a dinner plate in tone, characters are scarcely more than one-dimensional and played-up stereotypes to perhaps shameful excess, the story lacks focus and is all over the place, and it rather trivially handles a serious social issue…yes, it works. It revels in its superficiality, it’s fun, entertaining, dances are energetic, songs are expertly belted (future singing audition pieces!), the acting is solid, costumes are splashy and flashy, and several of the songs catchy and just…right!

The fictional town of Edgewater, Indiana is current day, but stuck in a time warp of inflexible gender sensibilities, at least related to the goings on at James Madison High School. The thorn in its side is Emma, a declared lesbian (Kaden Kearney) who, although constantly scorned by her peers, only wishes to attend the spring prom and dance with her closeted significant other, Alyssa (Kalyn West). That can’t happen, of course, says the head of the P.T.A. (Ashanti Faria), so the prom is cancelled. This makes the national news. Enter some stereotypical acting types from New York (Ashley Bruce, Emily Borromeo, Thad Turner Wilson, Jordan Alexander), down on their own acting creds, who read about the situation and plan to make Emma their cause célébre that they self-centeredly hope—because of their intervention on her behalf— will raise their own social reputation.

Of course (spoiler alert!), in that time-honored musical way, within two hours wrong-thinking minds are instantly changed, the shallow characters find their better selves, what look to be incompatible types get compatible, an inclusive resolution spontaneously manifests, a closet door opens, and love and understanding conquer all. Cue the big finale number!

Director and Choreographer Casey Nicholaw did an excellent job with a large cast, doing right by Bob Martin and Chad Beguein’s Book (loosely-based on a true story), and really giving us some spirited and inventive dances for both the ensemble and the principal cast as well. Matthew Sklar’s music literally hit the right notes, and Chad Beguelin’s lyrics, mostly, made sense and moved the story. I say “mostly” only because I felt one song, “Love Thy Neighbor,” just didn’t seem to fit. Costumes (Ann Roth, Matthew Pachtman) suited well, and some were over the top in a good way (how can I get my hands on a couple of them??), and the fairly large orchestra (Music Director Chris Gurr) I saw in the pit was right on.

Because of Covid complications with some of the cast, the premier of the national tour in St. Louis was delayed by a few days, but that did not appear to diminish the enthusiasm of the Friday (usually a Tuesday) opening-night crowd, some of whom appeared to be really big “PROM” fans before they walked in. I was kind of surprised to see more empty seats in the Fox than I’ve ever seen before, but those of us that were there got an entertaining night of musical theatre.

“The Prom” runs 2 hours 25 minutes, including a 20-minute intermission. It will be on stage through February 6, 2022. Visit fabulousfox.com for more information.