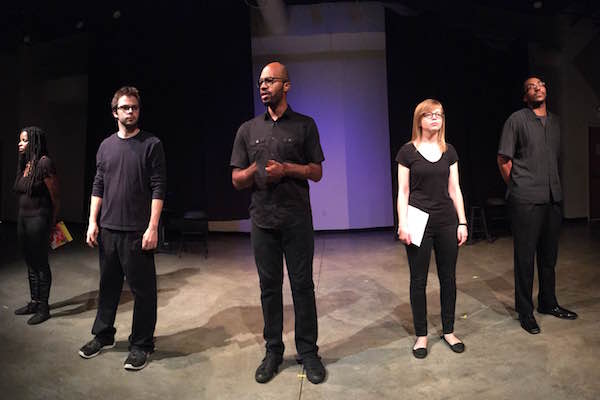 'Am I Black Enough Yet?' challenges stereotypes with humor, compassion, and honesty

Tesseract Theatre Company is dedicated to producing new and in development shows in St. Louis. From a thematic standpoint, they frequently choose scripts that tackle big issues facing our society, whether economic, political, racial, environmental, or personal. The shows boldly address subjects that may cause disagreement, but the company generally and purposefully avoids soapboxing or advocating from the stage. Instead, they find personal ways to tell bigger stories, with the intention that the stories lead to conversation and dialogue, rather than arguments.

Their current show, Am I Black Enough Yet?, by Clinton Johnston is a collection of short vignettes and monologues that openly questions and explores the idea of "being black." The show starts with the members of the cast conferring honorary blackness on the members of the audience, with those members who already identify as black awarded "uber black, like Shaft" status and asked to help guide the newly black through the experience. The idea appears to be to make everyone feel welcome and in on the subject matter, and it basically works. Audience members seem to relax and look around for a moment, acknowledging and greeting the other patrons -- something you don't always see in the theater.

The capable ensemble, anchored by Sherard E. Curry and Darrious Varner and featuring Anna Drehmer, Erisha Tyus, and Nathan Maul, deliver strong and varied performances and easily handle the sharply written script. The style of the pieces ranges from spoken word poetry to conversational monologues and short, scripted scenes touching on a wide range of topics. In fact, perhaps the greatest lesson of the show is simply that "being black" isn't defined by a single set of criteria, interests or behaviors. Just like being a member of any group doesn't necessarily define everything that you are.

The twelve or so scenes presented are independently and collectively interesting, and there's abundant humor woven throughout. If anything, the show tends to focus on finding the humorous moments, perhaps as a way of trying to make a connection or relieve any uncertainties the audience may feel. Each story is well written, making it difficult to pick favorite scenes, though a few stand out in ways that linger well past the curtain. Varner's cadence and intonation in the scene about two black girls on the bus is masterfully lyrical, but grounded in reality. Curry brings the sense of time and pain to his portrayal of a great black musician hesitant to accept an honor from an organization that won't accept his full self.

Drehmer gives a chilling performance as a teacher facing bigotry in her classroom, patiently answering questions until she almost snaps. But does she tacitly agree with the student she's addressing, or are her final words the sign of resignation and defeat? Tyus shares a few jokes she learned; it starts light, then the impact of her words and emotional sub-context reveals so much more. She's also strong in a number of group scenes, including a strangely wonderful piece about a break up with Maul and Curry that is a bit twisted, but funny. A scene with Drehmer, Maul, and Curry in a small town in Minnesota is absurd, yet totally believable, as is the wonderful short piece on "guilty pleasures," a topic on which we can all relate. One of the final pieces, about the writer and illustrator Ezra Jack Keats, ends the evening on a warm and satisfying note, because we all should have heroes that look like us.

Director Bre Love shows strong insight to the material, and she's made some great choices with her actors and the pacing and flow of the show. The actors are compelling throughout, and the stories that include history and personal choices are particularly engaging and filled with dramatic tension. While several of the short scenes feel complete and finished, there are a number of stories that I would enjoy seeing expanded into a full play.

Am I Black Enough Yet?, in performance through September 18, 2016, was the first show Tesseract Theatre produced, and is getting a rare reprisal this fall. Still relevant, the entertaining show is the perfect choice to revisit as the company prepares for its next chapter, in the new .Zack Arts Incubator.