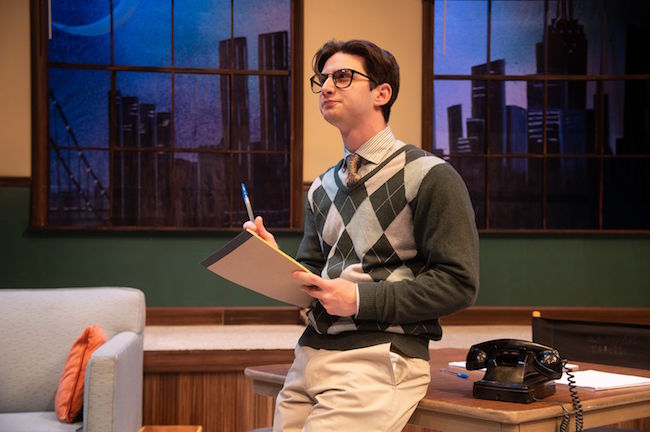 Humor, camaraderie and a touch of nostalgia win the day in ‘Laughter on the 23rd floor’

The golden era of live television and its myriad comedy variety shows gets a loving send-up in “Laughter on the 23rd Floor,” by Neil Simon, at the New Jewish Theatre. The non-stop funny show is powered by a genuine sense of friendship and trust among the fantastically talented cast.

Though not entirely autobiographic, the show, like so much of Simon’s work, springs from his own experiences. This time, his stint as a writer for several popular variety shows that were the mainstay of the networks provided the inspiration. Director Edward Coffield and an exceptional cast do a superior job of balancing the sense of familiar with the freshness of a story unfolding.

The fast moving, fast talking play gives us a peak at the inner workings of television’s early days, although we never see the cameras rolling. Instead of recreating a famous show, the well-structured and consistently funny script takes us way behind the scenes and into the writers’ room of the most popular 90-minute variety sketch show in America. Decades before Lorne Michaels brought us SNL.

The thing is, when Simon first wrote this still funny, if somewhat dated, comedy these characters were fresh. The writers affectionately skewered in his script were still working and honing the craft they weren’t yet famous for. Still cranking out comedy and variety sketches week in and week out. In the middle of dealing with everyday worries like their relationships, families and whether Joseph McCarthy would turn his ire in their direction.

From Ben Ritchie’s acerbic, pill-popping Max Prince, the star of the show, to the distracted and flirtatious receptionist Helen, played with a likeable ditzy-ness by Annie Zigman, every character is distinct, if now a bit clichéd.

Anyone with an appreciation for the era and genre will recognize the shadow of now legendary writers in the room. Joel Moses’ unflappably quirky Milt Fields. Aaron Mermelstein’s grouchy head writer Val Skolsky. John Wolbers brash, Hollywood bound Brian Doyle. Michael Pierce’s quick-witted golden boy Kenny Franks. Kirsten De Broux’s wise cracking, glass-ceiling breaking, just one of the guys Carol Wyman. Dave Cooperstein’s dyspeptic but always on the mark with a punch line Ira Stone. Each writer as funny as the other, they’re constantly throwing barbs, one-upping each other and competing to get their bits chosen for the show.

And then there’s Jacob Flekier as Lucas Brickman, our narrator and the newest writer in the room. Flekier has an open, friendly demeanor and a natural sense of rhythm that draws you into the story, even as his character is still trying to find his place. He introduces the other writers with a mix of awe and affection that’s palpable, and a guileless likeability that’s instantly endearing. He’s a talented writer and gets his one-liners in too, though, don’t worry.

Set in the mid-1950s, during the height of Senator McCarthy’s red scare, the story follows the last year or so of “The Max Prince Show.” In addition to worries about the show’s direction, the writers face fears about being cancelled, about a staff reduction and about the state of the world outside the safety and humor of the room. The uncertainties and tension about the political divide in the U.S. feel not entirely unfamiliar in today’s political climate.

And, though the conversations are positioned as light and breezy, there’s plenty of worry and concern lurking behind the writers’ smiles. Carol Wyman insists she’s “one of the boys,” even as she struggles to get pregnant. Lucas remains cheerful and upbeat in his demeanor, all the while assuming he’ll be let go first as he is the newest hire. Their issues are not dissimilar to ours; the writers are just a whole lot funnier when they talk about them.

Scenic designer Rob Lippert, costume designer Michele Friedman Siler, lighting designer Michael Sullivan and sound designer Ellie Schwetye have created the perfect mid modern set for this loving tribute of a comedy. Every detail, from Flekier’s argyle sweater and De Broux’s period maternity wear to the pre-show live studio audience sounds and the perfect door to the room, adds texture and context. Coffield shows deep affection for the material and respect for the actors in the room with direction that feels naturally motivated, enabling each performer to fully embrace and inhabit their role.

Filled with local favorites and a few rising stars, the clearly committed cast creates strong, believable bonds that add authenticity to the gritty camaraderie of the writers’ room. “Laughter on the 23rd Floor,” continuing at the New Jewish Theatre through April 10, is consistently funny, with smart casting and direction and an incredibly well connected and grounded ensemble that will have you laughing all the way home.