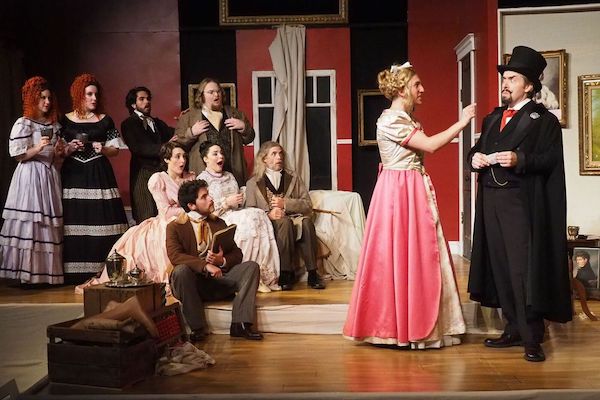 St. Louis Shakespeare embraces the farcical fun of 'Is He Dead?' with pitch perfect humor

St. Louis Shakespeare delights fans of theater and language with Is He Dead?, a delightfully camp comedy by David Ives based on a story by Mark Twain. The fast-paced play cautions us on the foibles of ignoring talent, chiding us for waiting until an artist is dead to celebrate -- and purchase -- their work. The charming and lighthearted show emphasizes humor over moralizing, however, and the result is thoroughly entertaining and often laugh-out-loud funny.

Jean Francois Millet is the most talented artist among a circle of friends living on the outskirts of Paris, but even he is struggling to sell a painting these days. When the art dealer and loan shark Bastion suddenly shows up demanding repayment of the funds he's lent the artist as well as the elderly patron Leroux, the friends appear in dire straights. An attempt to quickly sell some work to satisfy the loan goes awry, but leads to inspiration and much comic confusion as Millet appears to die, causing demand, and his sister Daisy arrives to manage his estate. Several tangled love stories and many disguises are employed in the search for the eventual happy ending, this is a comedy after all.

Director Edward Coffield and the talented cast revel in the clever wordplay and absurdly convoluted plot without over-indulging, resulting in a constant barrage of humor delivered with an exaggerated style and twisted but tidy approach. Though we've seen all the plot devices before, Twain and Ives add interesting dialogue and a bit of social criticism to their story, and use a character who asks a straightforward question as entry point into the plot twists and turns.

Zac McMillan engages as Millet and Daisy, and he's perfectly complemented by buddies Jack Zanger as Chicago, John Fisher as Dutchy, and Jacob Cange as O'Shauhnessy. The four employ physical comedy and seriously silly hijinks that show the influence of the Keystone Cops, Three Stooges, and Marx Brothers while deftly illustrating Twain's primary complaint. The show's sweethearts, Molly McCaskill as Marie and Natalie Walker as Cecile, willingly jump into the comic chaos with the men, as does their father Leroux, played to the hilt by Timothy Callahan. Though they take a lighthearted approach to their characters, the ensemble provides a sense of near realism that aids the plot and propels the dramatic tension.

It is the ancillary characters, portrayed in hilariously over-exaggerated performances by Ben Ritchie, Nicole Angeli, Jennifer Theby-Quinn and Joe Cella, however, that gleefully have the most fun in Is He Dead?. Their characterizations are so over-the-top as to suggest commedia del'arte, and it works. Ritchie is vaingloriously imposing and brutish as the villain, he even gets his own ominous music cue, as well as pointy eyebrows and a curling, sinister mustache. Angeli and Theby-Quinn cackle, tease, and drink everyone under the table as women with big hearts and suspicious moral fortitude. The two are impossible to ignore while onstage, their quips and banter communicating a good deal of exposition with a comic twist. Finally, Cella masters the art of the obvious, sot so hidden disguise as multiple characters. Though his initial assessment of the situation at hand is cleverly and comically off the mark, his characterizations are spot on funny.

The set, by Matt Stuckel, has the faded, somewhat tattered elegance of a struggling artist that suits Millet. Though a better job of masking the flats would be genuinely appreciated, it's a minor distraction. JC Krajicek adds much to the characters through costuming. Daisy's pink dress is an inspired and gaudy choice, the Madames' loud, color coordinated outfits are artfully excessive, Bastian's fiendish morning suit and top hat is villainy personified, and the sweetheart's fashionably feminine dresses are beguiling and flattering. Finally, lighting designer John Taylor and sound designer Ted Drury provide solid touches that emphasize without interference.

Is He Dead?, in performance through August 13, 2017 at the Ivory Theater, is a laugh-out-loud theater treat. David Ives clearly knows his way around classic scripts and clever wordplay. St. Louis Shakespeare excels in ensuring his scripts come to life with genuine affection and exaggerated humor that's played for laughs, but always has a point to reveal. The result is a tasty confection with a bit more substance than you may expect and a pleasing production that may leave you hungry for more.