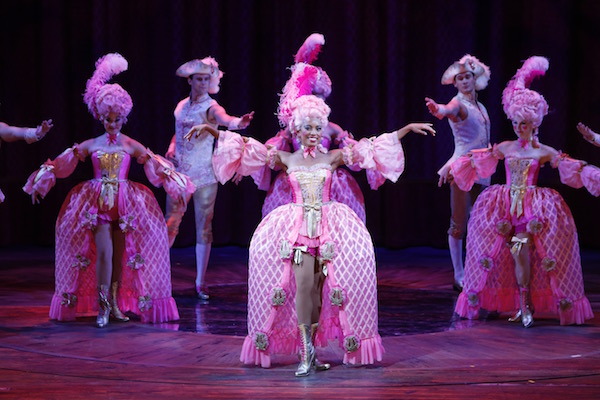 The Repertory Theater of St. Louis kicks of its celebratory 50th season with a spectacular production of Stephen Sondheim's Follies that is filled with a perfect balance of fantasy and reality. The show tells the story of Weismann's Follies, a fictional version of a famous entertainment style that was successful from the 1920s through the pre-World War II era. The extravagant shows featured singing, dancing, and comedy as well as a bevy of beautiful would-be starlets in sparkling, revealing costumes and flamboyant headdresses.

Follies opens at a party in the theater's backstage area in 1971, thirty years after the last show closed. Former stars, musicians, crewmembers, and their friend are gathering one last time before the old theater is raised for a parking lot. Cocktails are flowing, old friends are catching up, and old wounds and heartaches are felt afresh. As with many places we hold dear, the theater itself seems inhabited with ghosts from the past, with inspired direction by Rob Ruggiero enabling the actors to see and almost interact with their former selves.

The story focuses on two women from the 1941 and their husbands, who were close back in the day. Phyllis and Sally were roommates while members of the follies, and though Sally dated then married Buddy, and Phyllis dated then married Ben, there was always an attraction between Sally and Ben. The lingering effects of that attraction, and what it meant to each of the four participants, provide the shows dramatic tension.

Throughout the evening, however, we hear from women who starred in shows from 1918 through the late 1930s. Each woman's song reflects reignited feelings and roads chosen, and it is wonderfully satisfying to hear from the women, rather than telling the story strictly through flashbacks. From the parade of beauties near the top of the show to the interchanges between the past and present to the varied texture, knowing intonation, and wry phrasing of their singing voices, the show is rich with appreciation for the fullness of beauty at any age. Quite refreshing, yet not so new, considering Sondheim wrote the piece more than 40 years ago.

This is no way diminishes the finessed direction, choreography, and gossamer-like threads that seem to connect the past and present. Ruggiero and the ensemble are most impressive when they embrace their ghosts and, without this bridge, the spectacular fantasy-filled Loveland Follies could never be reached. I must admit to having a "Dorothy sees Oz for the first time moment" when the tattered stage turns and Loveland is revealed.

Christiane Noll and Emily Skinner are fabulous as former best friends and performers Sally and Phyllis, and the two are well-matched by Adam Heller, as Sally's husband Buddy Plummer, and Bradley Dean, as Benjamin Stone. Carol Skarimbas, Zoe Vonder Haar, Amra-Faye Wright, E. Faye Butler, Dorothy Stanley, and Nancy Opel bring wonderful texture and nuance to their roles as the other Weismann beauties, and are well supported by the rest of the cast, including Robert DuSold, Ron Himes, James Young, and Joneal Joplin as well as the ensemble representing the characters in their youth.

Each woman has a share of the spotlight, and the numbers reflect the styles of their time on the stage. "Broadway Baby," and its medley with "Rain on the Roof" and "Ah, Paris" were descriptive and nicely woven treats. "Who's That Woman" and "I'm Still Here" ring with personality and soul, while "One More Kiss," "Could I Leave You," and "Losing My Mind," are three distinctly different heartaches. The group numbers "Beautiful Girls" and "Loveland" are filled with the pomp, circumstance, and exquisite costumes of the follies, as well as a wink and a nod to fun.

The Rep has access to some of the best technical crew available, and they put those talents to full use in every aspect of Follies. Music supervisor Brad Haak and choreographer Ralph Perkins complement Ruggiero's outstanding direction with strong numbers and delicately interwoven choreography that emphasize the allure of memory and the tenuous nature of life and love. Amy Clark's follies costumes are spectacular, and the other pieces suit the characters and period well, reinforcing the bond between reality and fantasy much like Luke Cantarella's impressive shabby to chic set design. John Lasiter and Randy Hansen add the final touches with polished, well-integrated lighting and sound designs, respectively.

If the opening show is any indication, The Rep has certainly set high standards for their season. The cast is connected to their characters and committed to the story, the songs touch on a variety of styles, from cabaret and vaudeville to ballads and catchy pop tunes, and the technical support is excellent, ensuring the compelling Follies, running through October 2, 2016, is visually and musically stunning.