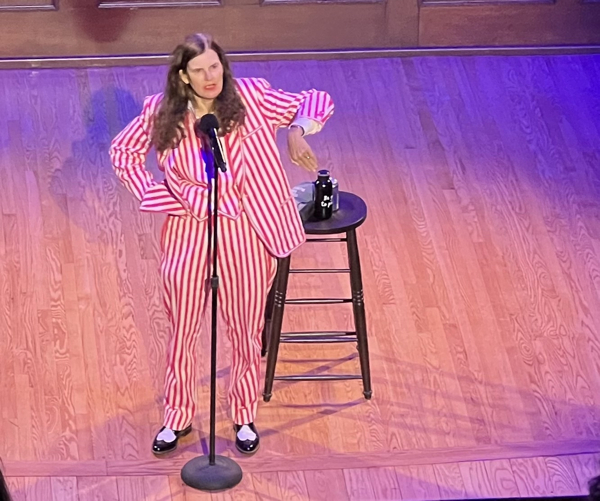 At the Sheldon, everybody listened to Paula Poundstone

The title of comic, actress, and writer Paula Poundstone’s hilarious and informative podcast is “Nobody Listens to Paula Poundstone.” Based on the response by the sold-out crowd on April 30th for her long-postponed appearance at The Sheldon, I’d say that might be something of an exaggeration.

For over 90 minutes, we not only listened to Paula Poundstone, we also laughed. A lot. Her political jokes fell upon sympathetic ears, of course, but so did her stories of the quotidian travails of a performer constantly on the move in these times of, as Tom Lehrer said, “universal brouhaha.” The simple vexation posed by reclining airline seat backs, for example, became the basis for an extended mix of verbal and visual comedy, especially after an audience member admitted to pushing hers back to prevent her head from rolling to one side.

Her tales of the joys and sorrows of pet ownership also resonated with the crowd. Our little group has a couple of high-maintenance canine family members, so Poundstone’s account of a visit to a veterinary cardiologist whose solution to her dog’s congestive heart failure involved “inserting a tube into my bank account and draining it” really struck home.

If you’ve never seen Poundstone’s act before it can be difficult to describe. It’s a hybrid of traditional jokes, real-life stories (possibly embellished for maximum comic effect), wry political rants, and impromptu riffs on interactions with audience members in the first few rows. The simple question “what do you do for a living?” can easily lead to an entire routine of its own, as was the case with a retiree whose job at Boeing had involved testing paint fume levels in the shop. It was a rich vein of humor ore and if it was mined past the point of exhaustion, that’s just live comedy, folks. They can’t all be gems.

The vast majority were, though. And while Poundstone claimed that she has a terrible memory, she showed an impressive ability to bring back those off-the-cuff bits later in the show as punch lines when I least expected them. Surprise is an important element of comedy, and she used it well.

I also liked her whimsical wardrobe sense. Last night that took the form of a cartoonish, almost clown-like red and white striped suit with shoes that would not have looked out of place on Jay Gatsby. An outfit like that slaps a smile on your phiz and says “comedy” before a single word has been spoken.

What really makes Paula Poundstone’s act unique, though, is its refreshing, ego-free honesty. She doesn’t drop names (even though she certainly could), and her stories spring from experiences that nearly all of us have shared at one time or another. This is “we’re all in this together” humor. We could use a lot more of that these days.

By the time you read this, Paula Poundstone will have left St. Louis far behind. But she’s on her way to other gigs, and they might even be in your town. To find out where she’s appearing next, check out her web site. And while you’re at it, listen to her podcast. Co-host Adam Felber (a pretty funny fellow in his own right) calls it a “comedy field guide to life.” That’s something else we all need these days.