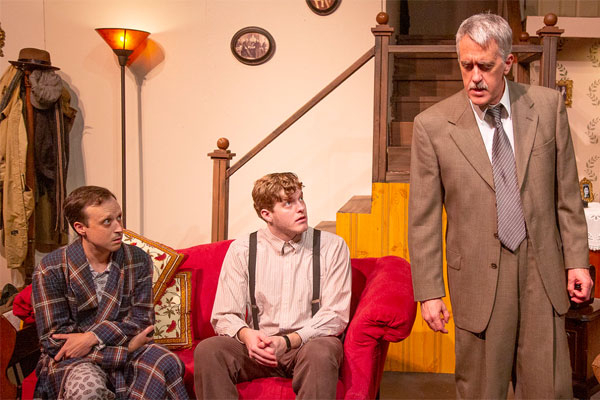 A Final Time in the Life: Neil Simon's 'Broadway Bound'

The Clayton Community Theatre's quest to perform each of playwright Neil Simon's "Eugene Trilogy" recently and finally came to completion after a multi-year Covid delay.

Having mounted "Brighton Beach Memoirs" in 2018, and "Biloxi Blues" in 2019, the company tried to complete "Broadway Bound," the third of Neil Simon's semi-autobiographical trio, in the spring of 2020, only to be interrupted by you-know-what. Now, two plus years later, "Broadway" has finally hit the stage, and Director Sam Hack no doubt was pleased as the cast includes members from the previous productions still around to reprise their roles.

In "Broadway," Eugene (a reflective Charles (CJ) Langdon), Simon's avatar, and brother Stanley (a restless Drew Bydberg) are attempting to break into comedy writing for show business on radio in 1949. Low-key and sentimental mother Kate (Gabi Maul), and grandfather Ben (a perfectly-cast Aaron Mermelstein), indulge the boys' ambitions, while perhaps not fully understanding what they're attempting to do. Father Jack (Jeff Lovell) seems a perfect family breadwinner, but has a secret of his own. Well-off daughter Blanche (Kati Puglisi) drops by briefly to interject a bit of family tension.

While the call to show business is successful for the boys, it comes at the expense of family harmony when it appears they're exploiting the mannerisms of family members as a source of comedy and resultant humiliation. As for the parents, the Father's secret does come out, leading to family heartache. So, what seems to be a perfectly perfect Jewish family in the New York suburbs is revealed to be not perfect; just completely genuine. A quiet bit of life lived on stage; no waves, but perfectly comprehensible to we the audience.

The two-level set (Andrew Cary, Zac Cary) is compact, dressed for the period, and set close to the audience, involving all in an intimate setting. Lighting (Nathan Schroeder) is well placed, and costumes (Julie Smailys) reflective of the period.

"Broadway Bound" runs about two and half hours with intermission. It will be on stage in Washington University's South Campus theatre on Clayton Road through July 31, 2022. For more information, www.placeseveryone.org.