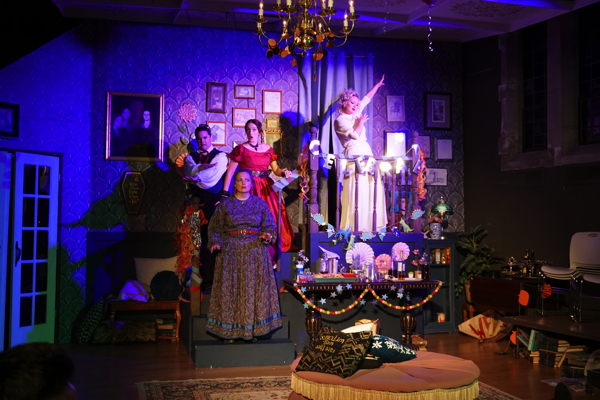 “Brontë Sisters House Party” is a dazzling mashup of a party, a love story, uproarious antics, an incredible soundtrack, and the Brontë Sisters. SATE has outdone themselves.

This is the world premiere of a script by Courtney Bailey, originally commissioned by the St. Louis Shakespeare Festival, and given a reading by the Festival at the Confluence Writers Project in March 2022. Bailey’s script was already good in March, but she has improved it through trimming without losing its sprawling, drunken party feel. Simply put: the script follows the Brontë sisters and their ne’re do well brother as they must put on a house party night after night in purgatory until they reach “The Point of Celebratory Reverence,” at which point they will be released into… who knows, exactly? And that question is one that the characters wrestle with in their own ways. The most moving part of the evening—because, yes, the play’s absurdity and mashup humor also gives way to delicately sublime moments—for me was when Rachel Tibbetts as Emily Brontë moved me to tears with a monologue near the end of the play about what she hoped might follow their endless party.

The plot of the play with its absurdist bent and “high culture/low culture” juxtapositions was almost beside the point. The script provided a nimble structure for each sibling to take the spotlight, and for unexpected guests to force the siblings to take stock of their pasts. The script also allowed the characters to give the audience “cordial” with which to toast collectively, to engage in any manner of pratfalls and verbal gymnastics, and for DJ Alexa (Zeck Schultz, also the Sound Designer) to give the whole evening rocking beats.

Those beats were already going as the audience entered the space, immediately providing a party vibe. The scenic and lighting design by Bess Moynihan was stunning. Moynihan created a room for audience and actors to share, with audience seated close to the action on three sides of the stage. The side without actors was a two-story wall with a staircase leading to a door, providing a wonderful location to spotlight important moments. Likewise, two other important areas of focus were created by the stage-level door to the set, and on the platform that was designated “the bathroom,” where, of course, intimate conversations took place, just like at a party. Moynihan also managed to put paneled ceiling tiles across the space with a Victorian pattern on them, and she did so without blocking her lovely lighting. By and large, the lighting was broad to light the whole stage, so when it did focus down to specific characters and moments, the change was dramatic. And this simple description of the design’s layout belies the complexity of the build within the space, and the details within every design aspect, from the magazines in the “bathroom,” to the writing on the throw pillows, to the Victorian wallpaper on the flats, to the numerous framed pictures, streamers, balloons, and other party decorations. The costumes by Liz Henning were detailed and witty. Henning maintained period silhouettes, but threw in intentionally anachronistic details, often to huge comic effect. During a rather serious moment, I laughed out loud when I saw that under her blouse, Emily Brontë was wearing a Stranger Things t-shirt (trust me, that joke will make sense). And that is just one example of how Henning’s costumes brilliantly matched the fun-loving intellect of the script.

Each of the Brontë siblings is played with great care and attention to detail, and as the evening goes on each shows different cracks forming on their party-façade. Rachel Tibbets as Emily took me on the longest journey, from hating people to being central in a love story. Maggie Conroy as Charlotte displayed the delicate nature of getting a little attention from someone in a position of power whom one admires, and then the rage that can follow such a relationship. Cassidy Flynn played Anne as an outrageous ditz, which then gave great depth to the character’s monologue on the subject. Finally, Joel Moses as their hapless brother Branwell took what could be an easy character to despise and used the well-written pathos in the script to take the character in a more nuanced direction.

Of the unexpected guests to the party, Cathy is the one that stood out most to me. Played by Bess Moynihan (yes, the same person who did the set and light design!), is a barely contained lightning storm in a white dress. She breaks into the production, grabs it by the neck, and never lets it go, equally able to get the audience to watch her be still while eulogizing a moor rat and to get the audience to watch her high-energy hijinks.

All of these moving parts were skillfully made into a unified whole by the director Keating. Keating’s blocking made the most of Moynihan’s set; they kept the production’s pace appropriately quick; and they wrung every joke and meaning from the by turns comical and erudite script. Having seen the reading at the Confluence Writers Project in the spring, I was not surprised at how funny the production was. But Keating’s direction showed me also how moving the script is.

I look forward to this script’s continued life, as it surely deserves more productions. Party On, Brontë Sisters! Performances of “Brontë Sisters House Party” continue through August 27th at The Chapel in Clayton. For more information, visit the SATE web site.