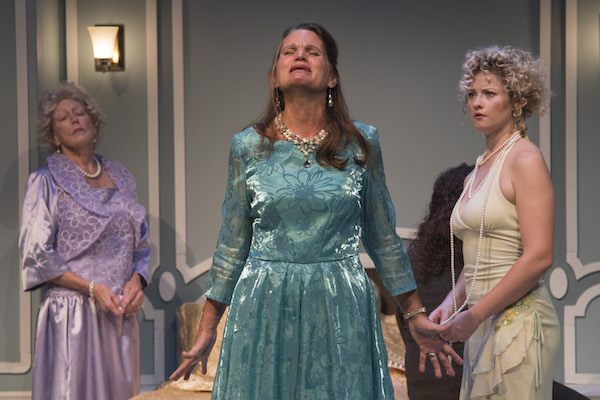 The 2016 theater calendar has been a banner year for St. Louis theater, with a number of companies celebrating milestone anniversaries in their current season. St. Louis Actors' Studio joins the list of accomplished companies, opening its 10th season with Edward Albee's engrossing Three Tall Women. The Pulitzer Prize-winning script is filled with insightful dialogue and sharply drawn characters that open the window into the soul of an aging matriarch known simply as "A."

The play is presented in two distinct acts that complete the picture of a strong-willed, independent woman whose flaws and temperament color and strain every interaction, destroying her most important relationships. Set in 1991, the play explores aging and self-identity from a variety of angles, culminating in a brilliantly scripted second act conversation with the self that is humorous, perceptive, and equally cruel and forgiving.

We are introduced to the main character, played with great range and sensitivity by Jan Meyer, in her later years, living with only her attendants and staff to care for her. Though not yet bedridden, she is 91 and suffering from fragile bones, fractured memory, and an acute awareness of death's proximity. Meyer skillfully moves from lucid to lost and from acid-tongued to sweet nothings while maintaining a regal presence in the face of physical and mental decline.

She is dependent on a nurse, the nearly flawless Amy Loui, who seems to genuinely care about her comfort and well being, even when A is verbally abusive, pointedly unkind, or unconsciously racist and offensive. A is also visited by a young lawyer from the firm handling her estate. The lawyer, played with impeccable confidence by Sophia Brown, is filled with questions and quite skeptical of A's ability to handle her own affairs, though she can't say as much directly. The conversation alludes to the woman's long life and personal struggles, piquing audience curiosity and setting up the surprising second act, in which each of the three woman represent Character A at different ages -- 21, 52, and 91, or 92, perhaps.

The character's quickly failing health has summonsed her selves to the room, and the three chat about her life as they, and her estranged son, patiently wait for her to die. Michael Perkins is stoic and still in the unheralded role of the son, unaware as Meyer, Loui, and Brown explode around him. The three actresses relate A's story while battling and seeking comfort from each other -- and the relationship between the selves is as fractured and tenuous as A's grasp on life.

Patrick Huber's set is nicely appointed, reminiscent of A's fading wealth and aesthetic sensibilities. The colors in the set and his lighting design reflect a character that is cool, but not cold, conservative, but newly rich and slightly loud about it. The costumes, by Carla Landis, reflect the same conservative showiness. I particularly like the second act costumes' floral references. Brown, as A at 21, wears a soft pink dress with a shape and structure that suggests the petals of a flower in full bloom, while Loui and Meyer wear dresses embellished with floral details. Loui wears a bold blue that represents her height of strength and determination, while Meyer wears a lavender shade that's a fading combination of the other two dress colors.

I also appreciate the differing wigs worn by Meyer; she's somewhat disheveled in the reality of act one, but expertly coiffed as her inner aging self. Even the decision to have Perkins wear his hair long and curly, visually referencing Brown's full curls, feels an intentional touch designed to complete director Wayne Salomon's vision of the tale and its deeper meaning. Though modest in budget and technical wizardry, the company is adept at supporting the script and the actors, who turn in powerful and affecting performances.

Meyer, Loui, and Brown, under the sure-handed direction of Salomon, find ways to peel back the layers, to confront and resolve their conflicting emotions and memories until they create a balance where they can comfortably coexist as one. Watching these three talented actresses unravel the tangled knots and weave back together as a whole is all at once painful, and satisfying, and mesmerizing.