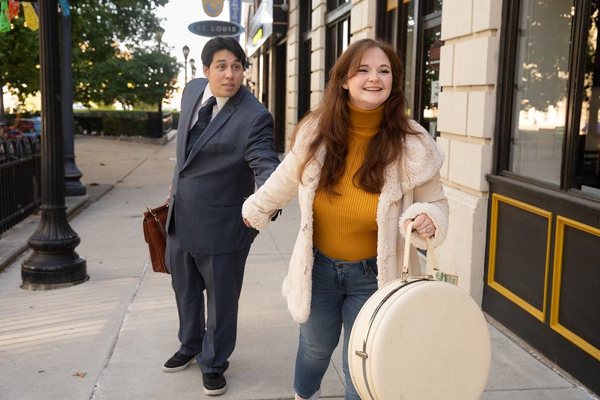 At Moonstone Theatre, Simon says 'Love can be FUNNY!'

“Barefoot In The Park” by Neil Simon premiered on Broadway in 1963. It was Simon’s longest running hit and garnered four Tony nominations with one win for Best Direction by Mike Nichols. Moonstone Theatre Company opens its sophomore season with this comedy classic. The little company that could (and SHOULD!) hits all the right notes once again. Impeccably helmed by Artistic Director-Producer Sharon Hunter this “Barefoot” combines pathos and humor beautifully and poignantly achieves Ms. Hunter’s season goal of taking a closer look at “humans attempting to understand each other”.

The story revolves around newlyweds Corie and Paul Bratter (played by Rhiannon Creighton and Luis Aguilar) and the first four days in their top floor apartment of a brownstone in New York City. The five flights of stairs, six if you count the stoop, play an integral part as they take the breath out of everyone except the vivacious Corie who finds life to be ever the adventure. Paul is the straight laced and grounded half of the couple which leads to comic and romantic tension as the days progress. Corie’s mother (played by Jilanne Klaus) shows up unannounced on day one and a few days later is set up on a blind date with upstairs eccentric neighbor Mr. Velasco (played by TJ Lancaster). Chaos and hilarity ensue.

As Corie and Paul, Rhiannon Creighton and Luis Aguilar share genuine affection and we see the newness of their relationship easily in Act I. The actors really solidify the relationship in Act II when things begin to crumble and the honeymoon phase is over. The conflict is heartbreaking at times in its veracity.

Jilanne Klaus as Corie’s mother virtually walks away with the show upon her entrance in Act I. She has impeccable comic timing and is able to seamlessly combine dry humor with authentic motherly love. Once TJ Lancaster enters the scene the pace of the show takes off. He manages to stay on the politically correct side of flirtatious, which can be difficult with a script written in 1963. We root for Velasco and Mrs. Banks from the start and who knows, they may be the couple that end up together in the end. This is a play about relationships: husband and wife, mother and daughter, second chance romance, stairs and lung capacity. How we engage, connect, and see each other. I applaud Ms. Hunter for her selection of “Barefoot In The Park” as her season opener because now, more than ever, we need to engage and connect with one another. Heading into Thanksgiving this is a great show to see with family, friends, and the friends we haven’t met yet.

“Barefoot In The Park” plays through November 13th at the Kirkwood Performing Arts Center. For Tickets and information go to the Moonstone Theatre Company website.