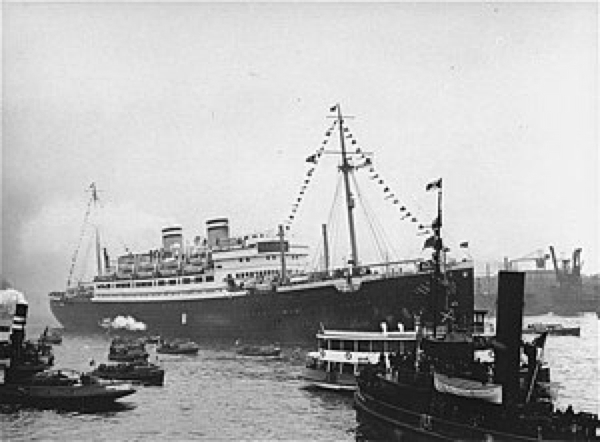 Upstream's 'The Good Ship St. Louis' not quite see-worthy

On May 13, 1939, the ship MS St. Louis left Hamburg flying the German Nazi flag and carrying over 900 Jewish refugees. They held valid visas for Cuba and most planned to emigrate to the United States. But when they reached Havana their documents were declared invalid, and the US declined to admit them. The ship returned to Europe, where the refugees were caught up in the tide of war and occupation. This heartbreaking story, known as “The Voyage of the Damned” has been recounted in several genres including film, novel and opera.

This tale is now the basis for the world premier play with music “The Good Ship St. Louis”, now running at Upstream Theater. There’s a reason why new plays are workshopped for months and this one could use more time and some cutting. Philip Boehm, “The Good Ship St. Louis” playwright and Upstream Artistic Director, would have been wise to stick with the opening premise of the play: a woman (portrayed beautifully by Kari Ely) unearthing documents in her deceased parents’ attic that reveal their unlikely connection to the MS St. Louis. How her Irish-American parents could have had anything to do with a ship of Jews fleeing Germany would make for an evening of fascinating theatre. Instead the play adds in unnecessary snippets of modern day refugees to remind us, heavy handedly, that similar atrocities are being perpetrated today. Instead original songs by Anthony Barilla do nothing to move the plot forward and clearly hinder the less confident singers in the cast. Instead we see random two character scenes, played by Christopher Hickey and Tom Wethington, sprinkled throughout. Perhaps these scenes were designed to tie everything together or bring comic relief but they are so poorly staged and so badly executed that they only detract from the production.

Jeff Cummings and Nancy Bell look the part as the couple at the heart of the mystery but I expect more emotional depth from such seasoned professionals. Peter Mayer as the ship’s captain is generally commanding in his performance but hard to hear when upstage.

On a positive note, the two stand out performances in multiple roles, worth the price of admission, are afforded by Sarah Burke and Eric J. Conners. As Jewish refugee, Sarah Burke is heartbreaking in her grief over losing her husband onboard the doomed ship. As modern day refugee, she gives us a master class in how to “act” a song and sing beautifully at the same time (in two languages no less). Eric Conners plays his role as a ship steward with appropriate put-upon-ness and subtle eye-rolling. He later absolutely shines in his roles as modern day refugee and southern story teller owning the stage and audience.

There’s a reason why plays are workshopped for months and this one could use more time and some cutting. There is a beautiful story here and some lovely moments. I think if Mr. Boehm trusted his audience a bit more and told the story of the MS St. Louis solely, we would go along for the ride with the woman at the beginning. Then the play would be, to quote Katherine Hepburn “YAR… everything a boat should be.”

“The Good Ship St. Louis” plays through November 20th at The Marcelle Theatre. For Tickets and information go to the Upstream Theater website.