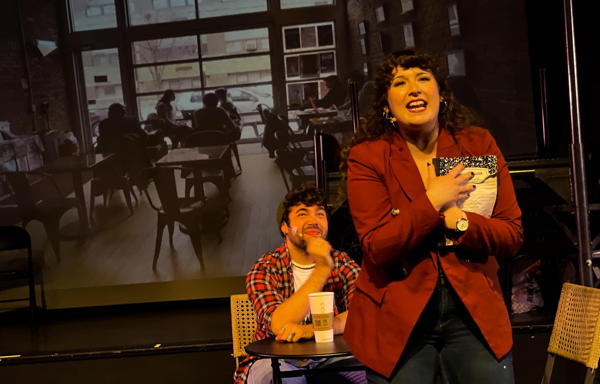 "Ordinary Days" isn't a big musical, but its staging is a big step for Tesseract Theatre Company. The show, a sweet-natured relationship story from writer/composer Adam Gwon, is Tesseract's first venture into the world of musical theatre, after focusing primarily on new and lesser-known plays. As a first foray into a new creative direction, with more musicals planned for next year, I would say this production gets the company off to a promising new start.

The show revolves around four characters--or five, since New York City itself is essentially a co-star in this story. Four young New Yorkers navigate the city, relationships both romantic and platonic, and their life goals in the first decade of the 21st Century. The play is tied to its time for at least one important reason that is made apparent as the story unfolds, but it's also just as tied to its location, with New York City representing both ordinary day-to-day life struggles as well as the "Big Picture" goals as emphasized in one of the show's more prominent songs.

The characters interact primarily in pairs. There's Micheal Lowe as Jason, a hopeful young man who has optimistic dreams for his relationship with his girlfriend Claire, played by Brittani O'Connell. The two are embarking on a new stage of their relationship, having just moved in together, but Claire struggles with making a lasting commitment due to issues from her past that she hasn't revealed to Jason.

Meanwhile, ambitious graduate student Deb, played by Lauren Tenenbaum, is frustrated when she misplaces her notebook containing her thesis, and is thrust into a halting friendship with the ever-cheerful Warren, a would-be artist played by Jacob Schmidt. Deb first views Warren, who finds her notebook, with suspicion, but their interactions eventually help her to see beauty in the "little picture" of everyday life in addition to the bigger picture of the lofty goals she pursues. There's nothing flashy about this story, but it's simple and full of heart, humor, and moments of poignant drama, focusing on the characters and their relationships as they live their lives in the Big Apple.

The staging is simple but effective, with a deliberate pace dictated mainly by the songs, as the show is mostly sung-through. Even though the odd acoustics of the .ZACK Theatre sometimes make the show difficult to hear, director Elisabeth Wurm has assembled a strong cast, with excellent ensemble chemistry and credible interaction between the pairs of performers. Lowe is an amiable, believably optimistic Jason, with a strong voice although he tends to sound a bit shouty in some of the more intense moments. He's well-matched by O'Connell, who is appropriately mysterious as the reticent Claire, and also in good voice except for a few occasional cracks.

The best singer in the production is Schmidt, who has a strong tenor voice that works well with his songs and his sometimes overly cheerful character, who Schmidt infuses with an affable spirit that makes him likable even when his cheeriness threatens to go over the top. Tenenbaum also turns in a strong performance as the ambitious, anxious Deb, delivering her songs with energy and conviction, and working especially well with Schmidt as their characters' unlikely friendship grows. The show also looks good, with the simple staging augmented by Taylor Gruenloh's memorable projections, Brittanie Gunn's evocative lighting, and Zach Neumann's proficient piano accompaniment.

Pivoting their focus to (mostly) musicals is a bold decision for Tesseract, but Ordinary Days shows that it's a good call. This show also had the biggest audience I've ever seen at a production from this company, so theatregoers seem to like the decision, as well. It's an auspicious beginning for Tesseract's next act, represented by a little show with a big heart and a strong cast.