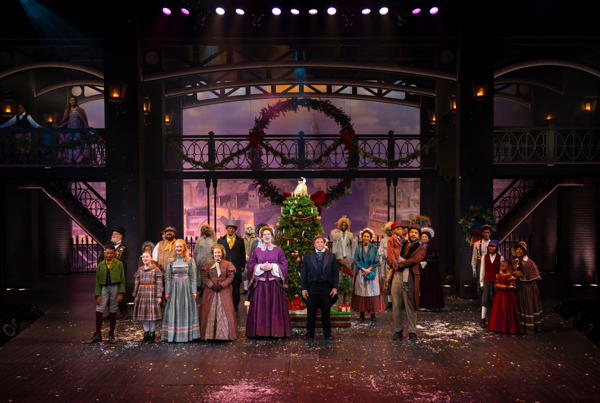 The Rep's ‘Christmas Carol’ is an inventive, energetic gift that continues to entertain

The Repertory Theatre of St. Louis’s holiday tradition is continuing with their lively production of Charles Dickens's holiday classic, "A Christmas Carol." The same adaptation by Michael Wilson that was staged to acclaim last season is back this year, and it seems to have found a new energy the second time around. With much of the same cast and the same stunning production values, the show carries an enduring message and a spirit that only seems more moving this year.

The story is well-known, following the classic Dickens tale with a few modifications, as the miserly, Christmas-hating Ebenezer Scrooge is confronted by a series of ghosts and forced to come to terms with who he was and what he has become, with the chance of reformation.  The casting is mostly the same as last year, and the players are more effective than ever--with Guiesseppe Jones at the center as Scrooge. Jones is joined again by Armando McClain as Scrooge's long suffering but optimistic clerk Bob Cratchit; Michael James Reed in a dual role as Scrooge's maid Mrs. Dilber and the persistent ghost of his late business partner, Jacob Marley; Laakan McHardy, Paul Aguirre, and Eric Dean White as the Ghosts of Christmas Past, Present, and Future, as well as "real-world" merchants in debt to Scrooge; and a host of others repeating their roles from last year, joined by a few newcomers like Peterson Townsend as Scrooge's cheerful nephew, Fred, as well as the younger adult version of Scrooge himself. There's also a vibrant youth ensemble in the child and teen roles, split into two groups performing on alternating nights--I saw the "Green" ensemble.

It's a strong cast all around, with Jones, Reed, and all three Spirits as the standouts once again, along with McClain's eminently likable Cratchit, and Townsend making a strong impression as Fred. The Rep is also collaborating with local organizations COCA and Big Muddy Dance Company, along with Webster Conservatory, adding cohesive energy to the ensemble.

The production values are as stunning as ever, with the set design by Tim Mackabee, costumes by Dede Ayite, lighting by Seth Reiser, and projections by Hana Kim all contributing to the alternately dramatic, funny, and truly thrilling tone of the production. There's also excellent work from composers and sound designers Nathan A. Roberts and Charles Coes as well as music director Tre'von Griffith. The music is a surprisingly effective blend of traditional European folk music, familiar carols, and hip-hop influences including a rap sequence and eye-catching dancing, inventively choreographed by Kirven Douthit-Boyd.

There have been so many versions of "A Christmas Carol" over the years, and the material has proven to hold up well in various forms, because the classic themes of generosity, kindness, and redemption endure throughout the generations. With the Rep's intention of making this show an annual event, I thought it might seem stale doing the same adaptation again, but I was mistaken. In fact, this year's version is even better than last time. It might be nice to see them change up the  adaptations at some point, but this one works so well with all the performance and technical elements pitched just right. It's an ideal theatrical start to the holiday season in St. Louis. For more information, visit The Rep’s web site.