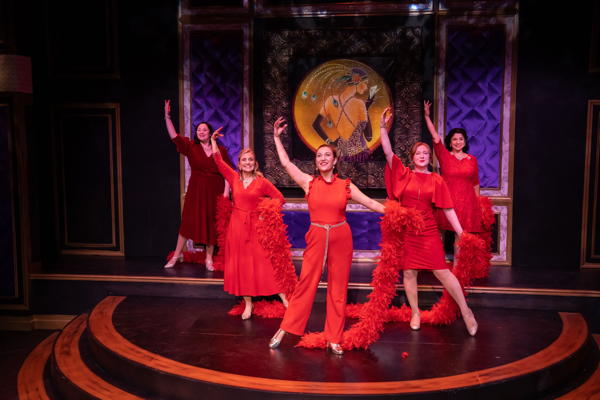 If you love classic musical theatre, you've probably heard of Jerry Herman, or at least you'll have heard of at least one of his shows. The New Jewish Theatre is closing out their 2022 season with a lively revue celebrating the music and lyrics of this musical theatre legend. "Jerry's Girls" features a small cast, but it's full of style and energy, and a worthy tribute.

Jerry Herman's best known shows are probably "Hello, Dolly!," "Mame," and "La Cage aux Folles," all of which are represented here along with some of his other works like Mack and Mabel, Dear World, and more. There's no story to this show. It’ just five performers and one musician, presenting some of Herman's most timeless hits along with some lesser-known gems. There are group numbers and solos, showcasing the excellent cast well, and featuring some fun settings to a few of the songs, including a hilarious version of "Hello, Dolly!" that closes the first act.

The cast is uniformly excellent. Kelsey Bearman, Molly Burris, Christina Rios, Greta Rosenstock, and Lisa Rosenstock shine in the group numbers, and all have memorable solos, as well--including Rios with "Before the Parade Passes By", Lisa Rosenstock with "Time Heals Everything", Greta Rosenstock with "Wherever He Ain't", Bearman with "It Only Takes a Moment", and Burris with "I Won't Send Roses". These are only some of the solo highlights, as there are several. The performers are accompanied by music director Cullen Curth on piano and accordion, and the rapport between performers and accompanist is another highlight of the show, as is the simple but elegant staging by director Ellen Isom. Isom's choreography also provides some memorable moments, like a fun tap number for Bearman, Burris, and Greta Rosenstock on "Tap Your Troubles Away".

This is a show that should appeal especially to fans of classic musicals, and the work of Jerry Herman in particular. "Jerry's Girls" has humor, emotion, and style, along with a great cast and a strong sense of musicality and ensemble chemistry. It's an entertaining tribute to a prolific and celebrated artist and his work. For more information, visit The New Jewish Theatre website.