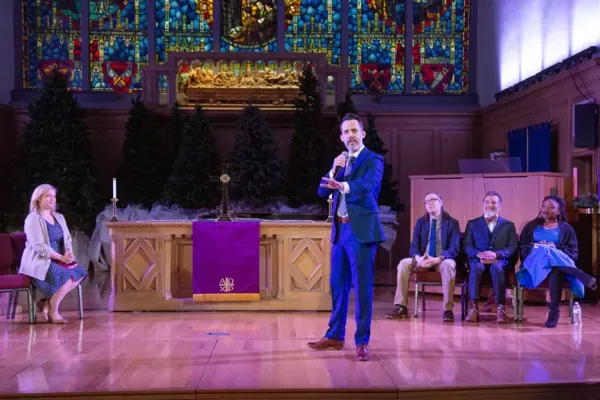 “The Christians” by Lucas Hnath produced by the West End Players Guild is performed in the main space of the Union Avenue Christian Church, with a beautiful stained glass backdrop and nothing more than a few chairs, subtle light changes, and static costumes—and this simplicity is the production’s strength.

Director Ellie Schwetye brilliantly lets the script speak for itself. Instead of moving around chairs or employing unnecessary props to let the audience know the characters are in a bedroom or office, she trusts the audience to understand the setting. By leaving the actors on the church alter, it also means no matter what scene we are in, we remember the crux of the play.

The Obie-award winning script by Lucas Hnath follows Pastor Paul who gives a controversial sermon in the first scene and then deals with the fallout for the rest of the play. Joel Moses plays Paul with great charisma and a flashing confident smile that gradually goes away. Joseph Garner plays Associate Pastor Joshua with a brash antagonism that crescendos late in the play. Michael Byrd plays Elder Jay as a man hesitant to bring harsh truths to his friend. Chrissie Watkins brings a great amount of depth to a congregant, Jenny, who might otherwise be played as naïve. Instead, Watkins plays her character as the person who asks Pastor Paul the hardest questions with a genuine, heartfelt earnestness that ends in a truly tragic moment. Finally, Rachel Hanks as the Pastor’s wife does a star-turn embodying a woman torn between a man she loves and a faith she believes.

The costumes aren’t credited in the program, but they define each character, and the subtle lights by Catherine Adams depict Paul’s fall into darkness brilliantly. Between Adams lights and Schwetye’s direction, the use of the church’s nave and alter function to create entrances, exits, and levels perfectly.