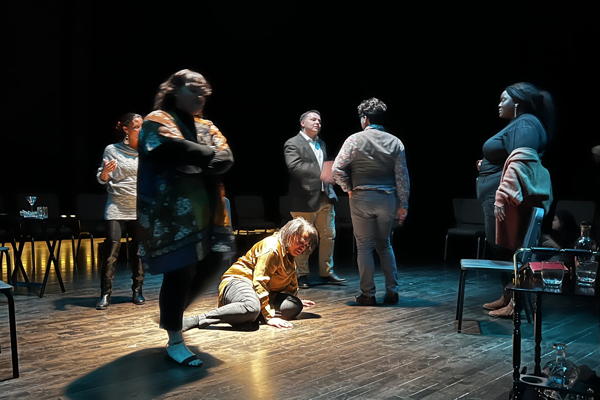 "The Fever," currently being produced by Black Mirror Theatre Company through December 10th, is an intriguing production. The play, which is written as essentially a one-person monologue, originally performed by playwright Wallace Shawn, has been expanded in an inventive way. Featuring a cast of six, the story uses its clever staging to drive home its unsettling, personal and political message.

In an author's note included in the digital program, playwright Shawn explains that this work was written to be able to be performed by anyone in various contexts, including in people's living rooms. In this production, director Brian J. Rolf's setup resembles a cocktail party, featuring a well-stocked bar cart, and ashtrays with cigarettes. The unnamed central figure, played by Kelly Ballard, tells the story of staying in a hotel room in a war-torn country, where she reflects on the state of society around her, and suffers from a mysterious illness. She is surrounded by the "cocktail party", its participants (Hannah de Oliveira, Uche Ijei, Victor Mendez, Kyra Pearson, and Michael Wagner) seemingly unaware of Ballard's existence as they banter, opine, and tell stories about their lives, focusing on the great disparity between the privileged and the poor, and reflecting on revolutionary movements and the promises of politicians regarding "gradual change". The points are made in various ways, as the ailing protagonist is suffering a "fever dream" of sorts, and the elite partygoers range in their approaches from the smug to the fearful to the downright cruel. The "plot" is fairly basic, and the main point of this show is the message, which is deliberately designed to make audience members uncomfortable, faced with unsettling realities of the disparity of living situations around the world.

This is an intense, political and personal message, made all the more visceral in this production's presentation. The transformation of the script from monologue to multi-character story is seamless, to the point where if I didn't know it was written for just one actor, I wouldn't have guessed. The "dialogue" seems natural, and the give-and-take of the conversations illustrates the message in a powerful way. All the players are excellent, as well, with Ballard giving a strong, emotional performance as the central figure battling physical illness as well as an intellectual, emotional, and mental crisis. The rest of the cast is also strong, and the flow of the conversation ranges from the arch to the smug to the intensely emotional. The pacing is deliberate, and the language is precise to the point where paying attention requires effort at times, but the presentation is duly challenging and pointed. The setup is simple and effective, with the production staged in the round, and the performance area sparsely furnished, with appropriately stark lighting by Michelle Zielinski that helps maintain the overall challenging mood of the production.

Overall, The Fever is an effective, highly challenging production that's sure to provoke thought and self-examination. It's an intelligent production with impressive staging and a strong cast. It's only running this week, so there are only a few days left to see it. It's certainly worth checking out.