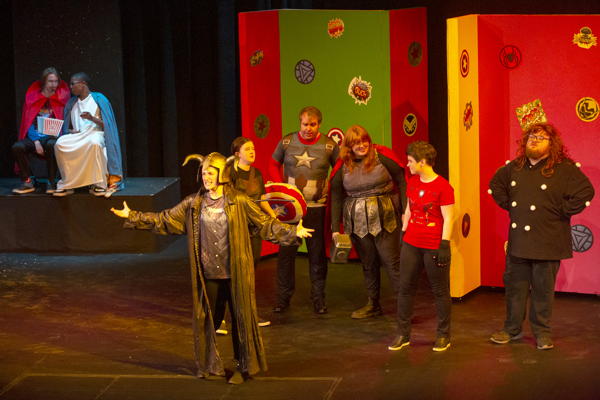 Magic Smoking Monkey Theatre is St. Louis Shakespeare's more mischievous sibling, best known for performing un-polished but hilarious parodies of well-known pop culture properties. Their latest, the cleverly titled "It's a Marvelous Life," was two spoofs in one, with a holiday theme and lots of laughs, a slapstick style, and an energetic cast performing a variety of roles. The show just finished up a two-weekend run on December 10. It was a short show, running approximately one hour, but that was plenty of time to provide loads of clever, fast-paced humor, likely to appeal most to fans of the Marvel Cinematic Universe and the the classic film "It's a Wonderful Life."

The story was inventively constructed, following all the major points of It's a Wonderful Life while also essentially telling the story of the four "official" Avengers films. Each Marvel character had a role to fill in the source story--with Steve "Captain America" Rogers in the George Bailey role--here played by co-writer Rob McLemore in a spot-on Jimmy Stewart impression. The events were being viewed by Uatu, the Watcher (James X. Randolph) and Dr. Strange (Riley Stevenson), who took the "Clarence the Angel" role, with his reward for helping Steve being his own movie franchise instead of wings.  The story played out, hitting all the main story points of both "It's a Wonderful Life"0 and the Avengers saga, with a good deal of inventive shoehorning to make everything fit. Mr. Potter was Thanos, Tony Stark/Iron Man was Mary Bailey (sort of), and--perhaps most hilariously--George's Uncle Billy was the Hulk. Many Avengers showed up, too, as well as other heroes from Guardians of the Galaxy, Black Panther, and more, with the story moving at a lightning pace and several actors frequently switching roles. There were many in-jokes and meta nods along the way, with references to actors and creators providing some of the funnier jokes.

It was a great time to be had for anyone, but I thought it would especially appeal to Marvel and classic film fans. The cast was excellent, with everyone seeming to have a great time. Standouts included McLemore as the very Stewart-like Steve Rogers; Tori Stukins as a swaggering Tony Stark, Stevenson as a delightfully goofy Dr. Strange; John Fisher in a variety of roles including Kevin Feige, Red Skull, and Black Widow's stunt double; Kim Byrnes as the villainous Thanos/Potter and Bucky Barnes; and John Waller as the smash-happy Hulk. It was a great cast all around, portraying an array of Marvel characters with madcap energy and flair.

The staging was brisk, with some jokes landing better than others, but since there were so many jokes, there were more than enough laughs to go around. The set by Ethan Dudenhoeffer was simple, colorfully painted by Brian Wasserman. The elaborate and whimsical costumes by Tracey Newcomb were a lot of fun, as well. There was also effective lighting and sound by John "JT" Taylor.

Overall, "It's a Marvelous Life" provided a simply marvelous good time. With superheroes, magic tricks, puppets, and more, there was a lot to like here. It has been another entertaining exercise in creative silliness from Magic Smoking Monkey Theatre.