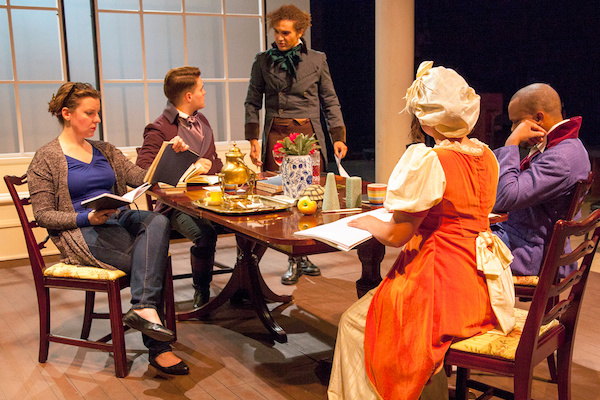 Setting yet another St. Louis theater milestone, this one for longevity, the West End Players Guild opens its 106th season with a thoroughly engaging and entertaining production of Tom Stoppard's playful and brainy Arcadia. Focused direction and strong performances boost this time traveling comic mystery, with Lord Byron, gardening, math, sex, and literature thrown in to keep the audience on their toes.

Set on a country estate in Derbyshire 200 years apart, the interwoven storylines are interesting and compelling. In the earlier period the science of order and conformity is pitted against the chaos of the natural sciences. In the present, the characters spar over the application of the scientific method, fact versus instinct, and the nature of creative genius. There's more than a touch of lustful scandal, and, in a surprising and satisfying twist, much of the romance is sparked by intellectual debate. Blended together, the two tales create a satisfying, if at times dizzying, story arc.

The show opens in flashback, in a cinematic sense, alternating scenes from the past and present until midway through the second act. It is often difficult to feel immersed in live theater when significant time jumps are introduced, but director Ellie Schwetye, assistant Kate McAllister, and the well-chosen cast succeed with confidence.

The cast is period distinct, with the exception of Mason Hunt, who convincingly plays a character of singular importance in each period. Hunt is the audience eye, more observer than participant, and his reactions reflect confusion, thoughtful progression, and intelligence.

Kristin Rion and Michael Cassidy Flynn are filled with youthful exuberance and curiosity as the heroine and hero of the past, while Nicole Angeli and John Wolbers argue and bicker with magnetic intensity in the present. The leads complement each other, and their counter-time couple as well, with Rion and Flynn overflowing with curiosity and possibility, while Angeli and Wolbers display seasoned restraint and skeptical interest.

One of the delightful twists in Arcadia is that both Rion and Angeli are intellectuals and, while each is comely, they attract with their minds. As importantly, they prize their mind and capabilities over affectations of gender. Director Schwetye and the actresses make wise choices that naturally emphasize each character's ability to see connections and possibilities others cannot.

The ensemble employs visually connected, near immersive storytelling that enables the scenes to seamlessly merge. Andrew S. Kuhlman, Anne Marie Mohr, Anthony Wininger, Carl Overly, Jr., and Scott De Broux complete the period cast, while Erin Renee Roberts and Jaz Tucker capably support the contemporary story. Each actor finds proclivities and preferences to distinguish their character. Kuhlman stands out for his peevish and petulant poet, Overly for his comically artistic flair, and Mohr for her primly passion. In contrast, Roberts and Tucker are smart but feisty, active foils to Angeli and Wolbers carefully studied academic demeanor.

The cast employs a variety of British dialects, and each character stays generally true to the chosen accent and consistent throughout the performance. There's a lot to say in this well-crafted script, however, and it is sometimes difficult to keep up as the cast is committed to a brisk, energetic pace. The approach works for the most part, but there are a few moments, particularly after a major revelation or significant clue is dropped, when a well-placed pause would serve the actors and audience well.

Attention to detail creates a layered story that is told as much by each prop's placement and use as it is by the distinct expression, personality, and motivations of each character. To successfully suggest the expanse of the grand manor, the set consists of one room, a garden study with a large table and picture windows, as well as multiple entrances and exits. Tracy Newcomb-Margrave does a wonderful job establishing period and tone with her costumes, and the props are impressive in number, detail, and significance to the overlapping stories.

In the service of transparency, this reviewer feels compelled to mention that I was part of a committee that recommended this script to the company, however I had no part in the casting or production. Audiences should also be cautioned that active listening is required, though you are likely to be quite pleased with the results of your effort.

Sharply scripted and smartly performed, Arcadia -- running through October 9, 2016 at the West End Players Guild -- is a fantastic choice for theatergoers who enjoy the mental entertainment of suspense mixed with history and imaginatively stirred.