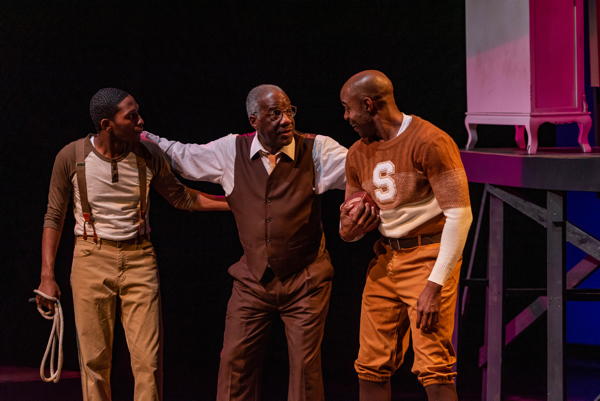 Un unforgettable 'Death of a Salesman' at the Black Rep

I deliberately did not read or listen to any of the pre-publicity before attending The Black Rep’s production of Arthur Miller’s American classic, “Death of a Salesman.” I made this choice because I wanted to experience this revival without any influence or preconceived notions of what I consider to be the American “King Lear.” I wanted to judge the production on its own merits and relevance, regardless of directorial intentions.

I was not disappointed. This production, led by a Black cast, transcends race, color and ethnic background and achieves The Black Rep’s aspiration to be “theater of soul,” which is to say, “theater for everyone.”

“Death of a Salesman” is a deep, multi-layered play that requires much of its actors to fully achieve its intended effects. The story of Willy Lohman’s crack-up and demise is about as well-known as that of the Titanic. We know the ending. But under the direction of Jacqueline Thompson, this production delivers a cathartic theater experience that is more about the journey than the destination – or both.

This is thanks to a strong cast from top of bill to bottom. Willy Lohman is played by Ron Himes, founder and producing director of The Black Rep. Hines frets, struts, rails and cajoles with an unrelenting intensity. His performance, while full of sturm-und-drang, is also textured and nuanced to reveal Lohman’s complexities. A key moment occurs midway through the play, when Hines delivers with near-spiritual awe, Lohman’s description of a fellow salesman: “… he died the death of a salesman, in his green velvet slippers…When he died, hundreds of salesmen and buyers were at his funeral.” The way Hines embodies Lohman’s misguided reverence and belief in a salesman’s afterlife is prophetic and heartbreaking.

Equally strong is Velma Austin as Willy’s enabling, long-suffering wife, Linda. Austin’s performance adeptly pivots from her loving desire to save her husband from himself to her fierce admonishments of her son’s choices and behaviors. And she does this while also delivering some of this adaptation’s best humorous moments.

Christian Kitchens and Chauncy Thomas, as Lohman’s sons Happy and Biff, provide and punch, swagger and anger as the bifurcated halves of their father’s divided self. As Biff, Thomas provides an impressive range as he transforms from the prodigal son to angry heir apparent and, finally, to self-actualization. The character Happy undergoes a different but not less important transformation from reckless young-man-about-town into the keeper of his father’s big, misguided dreams. Kitchens delivers a believable, well-rounded Happy and avoids become a cliché.

There are smaller roles in “Death of a Salesman,” but in this production, there are no small actors, including Jacob Cange, Emily Raine-Blythe, Jim Read, Franklin Killian, Taijha Silas, Zahria Moore and Carmia Imani. They collectively and individually support the greater story. Kevin Brown plays Willy’s ghostly, white-suited brother, Ben, as part Crypt Keeper, part Big Daddy and part Moses.

Stage manager Tracy D. Holliway-Wiggins makes maximum use of Washington University’s Edison Theatre and the multi-leveled set designed by Dunsi Dai and Lily Thomasic. The set is a metaphorical extension of the Lohman cattywampus universe with a marital bed that seems ready to slide into an abyss and the boys’ room with sports memorabilia askew. Behind the main set hang old windows, indicating the view into this crumbling world. The kitchen furniture felt scaled down to emphasize the characters while the plush sofa on stage left served as a mini-stage for Willy’s lust.

Early in the play, Willy says, “Be liked and you will never want.” Two hours later, you may or may not like Willy Lohman, but you will understand him better. And although the character does not receive his dreamed-for death of a salesman, the hundreds in the audience won’t soon forget him in this production.

“Death of a Salesman” continues at Edison Theatre at Washington University through January 29. More information is available at the Black Rep web site.