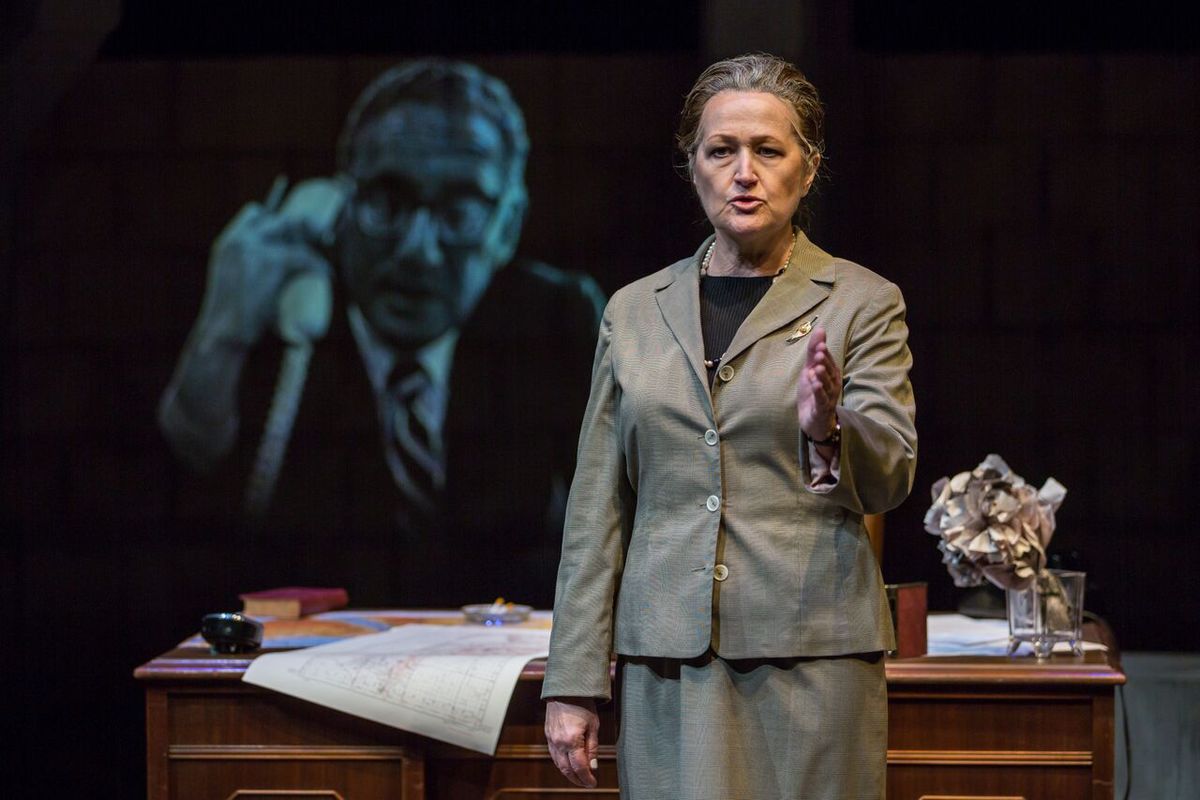 The New Jewish Theatre creates a personal and persuasive portrait of Israeli Prime Minister Golda Meir in its production of William Gibson's effective Golda's Balcony. The one-woman show, another superb performance by the versatile and sympathetic Lavonne Byers, goes both broad and deep when capturing the life and motivation of one of the twentieth century's most popular and divisive female leaders.

The show revolves around the Yom Kippur War in 1973, when Meir had her finger on the button and a steely resolve to use it, if necessary to defend her country. Only a concerted diplomatic effort, that included a commitment to the continuation of the state of Israel, would prevent a nuclear war.  This was a significant moment not only for the Jewish people, but also for the world and, more specifically, a region embroiled in centuries of conflict and dispute.

We are introduced to Mrs. Meir in her later years, as she sits smoking and reflecting on the difficult decisions and sacrifices she had to make, time and again. Between puffs and telling moments of reflection, she covers her entire life, from her memories of the pogroms in Kiev to growing up in Milwaukee to heading to Palestine with other idealistic Zionists with plans to bring the third temple -- the Jewish state -- to life. From these stories, it becomes clear that establishing Israel was not just Golda's work or calling, it gave her life meaning.

The simple poignancy of that statement, and the lives it deeply affected, cannot be easily communicated in a review. The choices that idealists must make when they achieve power are not easily numbered and their rationale sometimes difficult to understand. Byers captures not only the emotions and conflicts, but also the conviction, intensity, and passion that allows us to see Meir as more than a great leader. We see her as fully human, filled with contradictions and flaws that she cannot forgive, as well as longings that she would not ignore.

Under the skilled direction of Henry Schvey, Byers shows us the hesitation and worry of Golda during wartime decisions, revealing tenderness as well as strength. We then see the realism behind the "Mommile Golda" persona, when she ruefully asserts that the stock at the base of her chicken soup was made of blood. These contradictions point out the humanity of historic figures we often forget, the moments of cynicism, frustration, and doubt that are never revealed in public.

The show and stage are equally impressive and imposing, expertly conveying the sense of normalcy under pressure. Byers moves from story to story with confidence, directing our attention to the rock of Israel or the rods of uranium above her head without glancing up. Visually, we are reminded of the cost of independence, the lives lost in the pursuit of a nation, and the threat that hangs over every leader's head.

Golda Meir sacrificed much, championing a people at the cost of the self and ensuring the continuation of the state of Israel. Led by her most deeply held convictions, she became a powerful symbol for Jews and people seeking self-determination everywhere. Byers brings Meir to life in a compelling performance filled with nuance, humor, and just the right amount of gravitas, creating a fully realized picture of a remarkable woman.

Emotionally layered and effective, Golda's Balcony, running through October 30, 2016 at the New Jewish Theatre, gives us a terrifyingly real and decidedly unromantic view of those who seek to balance power and idealism. The one-woman biography is a stunning success and fitting tribute.