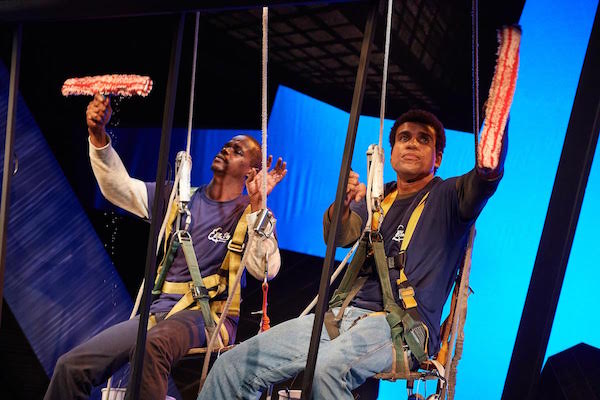 Upstream Theater's well-scripted and contained world premier of Maya Arad Yasur's one act play Suspended, is a powerfully moving story of the immigrant experience. We are introduced to Benjamin, a recent immigrant to the United States, played by Phillip C. Dixon, and Isaac, another immigrant from the same country, played by Reginald Pierre. The premise seems simple enough, Isaac has hired Benjamin to work with him; but nothing about this story is as simple, or straightforward, as it seems.

To begin with, the work is as a window washer, suspended well above the city streets, always on the outside looking in as they work their way from floor to floor. Isaac and Bennie, as Isaac calls him, were close friends in their home country, torn apart by war and rebel gangs that kidnapped and indoctrinated young men, turning them into boy soldiers. The fact that both men escaped only to reunite again, hanging side-by-side and suspended from the roof of a skyscraper, may be much more than coincidence. But that is for the actors to work out.

Linda Kennedy provides focused direction, and Dixon and Pierre turn in strong performances that compel the audience to pay close attention, watching every movement and listening for every nuance. There's much said through tone and intensity, but also in the smaller, quiet moments, and the brief flashes when the men's deep friendship re-emerges are genuinely uplifting. The two men have an easy chemistry, and it's easy to feel genuine friendship and concern in their relationship, important elements if the two are to survive working with each other.

The script tackles a myriad of topics as the men slowly and rhythmically traverse the outside of the building, repeating the same washing movements over and over. There's a lovely cadence to their movements and voices, and a general attention to the job at hand, which is getting to the top of the roof by dark.

As they talk, the fact that they are working such a precarious job seems less surprising, even when Benjamin accidentally looks down and experiences vertigo so bad that Isaac must grab and steady him. They have feared and fought for their lives so many times before, keeping steady and balanced must seem easy compared to dodging bullets, bombs, and soldiers. Still, it's realistic and lends authenticity later in the show.

Pierre's Isaac has lived in America for several years, while Benjamin is a recent arrival, leading to differences in perspective that are significant but not insurmountable. Dixon gives Bennie the wide-eyed appreciation of a new immigrant, but he shows restraint and a touch of skepticism. Pierre seems more acclimated to his new country, and determined to make a success, even as he feels he will never be fully accepted. The actors and director Kennedy ensure each man's tone and external actions reflect the turmoil he is still working through, successfully communicating their conflict and aspirations.

Questions about the past keep cropping up, though Isaac forcefully states that he doesn't want to discuss it, that the only way to succeed in America is to forget and focus on the future. But Bennie is haunted by a night during which his life was threatened and his sister impregnated by a soldier. He believes Isaac is the only one who can help him understand what happened. Each man is forced to deal with the trauma of the past, as well as to confront his feelings about the other man -- a man who now has the power to send him plunging to his death. Even in the safe space of a theater, the effect is chilling and the tension real.

The set, lighting, and sound, by Cristie Johnston, Tony Anselmo, and Dan Strickland, respectively, do an excellent job of bringing the audience into the scene. The perspective, the weather, and passing of time are well-executed effects that add much to the story. I do question the frequent use of a freeze in the action throughout the show. Though it punctuates some important moments, the device is also used randomly, causing a bit of confusion over intention and the intended time frame. Additionally, a little more attention to the physical action of the men's occupation, the illusion of moving up and down or across the window, will add to the show's immediacy.

Upstream Theater's provocative and layered Suspended runs through October 23, 2016, at the Kranzberg Center of the Arts. There's more than the history of childhood between these two men, and audience members may find themselves on the edge of their seat, filled with emotion, and waiting to plunge into the story with these two talented actors.