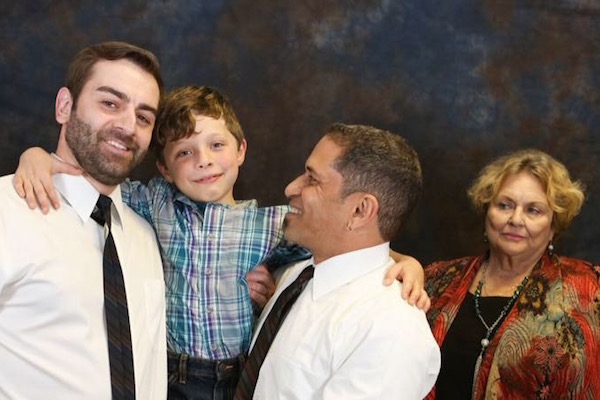 'Famalee' illustrates the ongoing fight for LGBT and adoption rights in a heart-warming, redemptive tale

Three 5 Productions premier of Joe Alway-Baker and Bart Baker's Famalee introduces audiences to the Carter-Medina family. The large family is centered on dads Peter and Raul and son Christopher. The three represent a new, less conventional family, but they are not unfamiliar to most audiences. Though flawed, the show is filled with interesting characters and tells a heartwarming story that's a welcome addition to the collective human tapestry.

The three live together in a large, comfortable house with Raul's younger brother Luis and, eventually, Peter's mother Emma. Sister Sandy, Maria the nanny, and a host of other close friends and family are frequent guests, suggesting that the family is part of a relatively supportive community. The dad's have been a couple for years, and adopted Chris as an infant, and they are now finally getting legally married.

The show opens on the happy occasion of the couple's wedding, but Famalee soon introduces conflict. There's a death, Emma's age-related needs, and a biological father who reappears to assert his parental rights. Frankly, there's a lot going on in this show and, while the story is interesting, it's almost overwhelming. Director Natasha Toro does an admirable job wrangling and weaving the various elements of the story together, but some judicious editing and a limited focus that delves deeper into the sub-context and characters will significantly improve the script.

There are a number of poignant and moving moments in the show, and the talented cast successfully conveys the love and warmth of family throughout. Choices are made that show a genuine concern for Chris, the son, as well as a growing respect and affection between Emma, Raul, Luis, and even the estranged biological father.

Joe Always-Baker and Clayton Bury have an easy chemistry that suggests long-term love, and William Strelinger shows strong acting instincts as Chris, though he should continue working to find his emotion rather than manufacturing it. Donna Weinsting is not always sympathetic as Emma, but she comes around as the character's better nature is teased out. Showing characteristic sass, Emma gets some of the best one-liners but also shows tenderness and slow but significant change. Weinsting is careful not to overplay the grandmother's prejudice or redemption, a smart choice by the actor and director.

The supporting cast is capable and present in every scene. Richard Louis Ulrich adds comedy and a light tone to his portrayal as the lothario uncle, he's friendly and likeable in the role and his interactions with Chris are playful. Leading actors like Paula Stoff Dean, Shannon Nara, and Ford Fanter add gravitas to the production and Chuck Winning, Elaina Creighton, John Reidy, Jeremy Thomas, Krystal Stevenson, Maritza Motto Gonzalez, Judi Jones, and Maya Kelch round out the pleasant ensemble.

Despite the capable and talented cast, the show doesn't altogether succeed. Famalee is a compelling story, with interesting characters, but it runs about 30 minutes too long. I question the need for the direct to the audience monologues, as they don't add valuable exposition or character exploration. Even Peter's comments work best when delivered in situation, though no one but the audience can hear him. Tighter focus, and perhaps some selective editing of the story, will also improve the flow and pacing of the show.

I want to see this play, but there's almost too much going on to allow for effective plot development, which will help the production standout. LGBT adoption is an important issue. Showing the struggles and celebrations is valuable, and the authors have approached their script with love and a genuine desire to tell the story. I encourage them to revisit their script and look with fresh eyes to pare and refine the good work they've started.

Reflecting "real life" in theater is always a tricky proposition. Theater is an art form that revolves around storytelling. In the theater, time is crystallized and moments can be examined from all side. Emotions, reactions, and intention are heightened, dialogue is sharpened, and focus and clarity are precise. But real life doesn't work that way, and calamities pile on and grief seems too hard to bear. Real life continues; the show will end after just two acts.

Three 5 Productions' world premier of Famalee, in production at the Ivory Theatre through October 30, 2016, is a welcome addition to the St. Louis theater community. Their initial production is a personal, semi-autobiographic tale of a somewhat unconventional yet increasingly familiar family. The script is every bit as imperfect as our lives and a thorough revisit is encouraged, but a strong cast and a positive and effective story ensure the production is both entertaining and thought provoking.