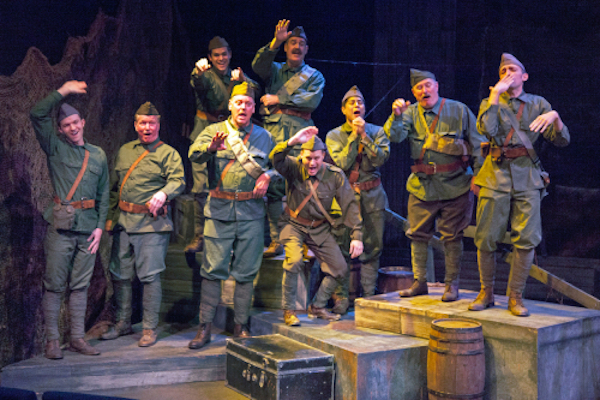 An Ode to our better selves, 'All Is Calm' shines a beacon of hope and peace in worrisome times

Mustard Seed Theatre once again brings the musical All Is Calm to St. Louis audiences for the holiday season. The story, based on actual events that transpired on Christmas Eve and Day along the front lines of World War I, is an inspiring, moving tale. A combination of songs and monologues pulled from soldiers' letters, the show quietly but forcefully reminds audiences that the holiday season is also about "peace on earth" and "goodwill to men."

In the weeks leading up to Christmas 1914, the Pope called for but could not get an agreement on a holiday truce between the allied forces and Germany. In a surprising act, the soldiers in the trenches spontaneously declared a truce of their own. The warring factions ceased fighting with bullets and bayonets and instead sang familiar holiday songs to each other. Eventually, many of the troops met between the trenches, exchanging souvenirs, sharing personal stories, and even playing soccer.

Paul Cereghino opens the show on a high note and never backs away from the mark as the other voices drone, bagpipe like, in accompaniment. His voice is strong and pure, and immediately grabs your attention. Anthony Rodriquez fills the stage with natural empathy, and he deftly steers many of the show's important transitions. Rodriguez's voice is clear and pristine, both he and Luke Steingruby show brilliance and control on the higher notes. Steingruby also has a captivating solo that leaves the room silent in awe and emotion.

The crisp, sparkling voices of Jeff Wright, Gerry Love, Kent Coffel, and Steve Jent mix with effortless ease that envelops the room. Steve Isom and Gregory Lhamon have noteworthy songs, and provide considerable texture and gravitas to the show, while Kelvin Urday once again impresses vocally and on the trumpet. The ensemble pieces feature intricate, pitch perfect harmonies and spot on characterizations. Their voices, under the confident direction of Deanna Jent and music director Joe Schoen, blend expertly and I would listen to a CD of this ensemble performance year after year.

The spontaneous nature of the truce unfolds as the show moves fluidly between song and letters. Dialect coach Richard Lewis ensures the accents are distinct and appropriately varied, and the actors hit all the emotional levels while telling a story that warms the heart, creating hope for peace in troubled times. The commitment to storytelling is the soul of this musical, and the ensemble cast is mesmerizing and on point from the first note to the last refrain.

The message of All Is Calm comes from the historic accuracy, use of letters, and selection of traditional and period songs. The songs provide context, a sense of era and, most importantly, an emotional arc that complements and connects the monologues. The set, by Kyra Bishop, costumes, by Jane Sullivan, and lighting by Michael Sullivan, make excellent use of the theater space, conveying both the expanse and isolation of army trenches. But it is through the performances, with excellent direction and technical support, that we feel the incredible significance of the occasion.

All Is Calm, with an extended run through December 11, 2016, is a hopeful tale and a welcome addition to the holiday musical genre. Though centered on Christmas, the theme reminds us of the universal and very human desire for peace. Reflecting on the truce from a 21st century perspective, we are reminded that peace, even if fragile and fleeting, is not simply a common human desire, it is achievable.

Mustard Seed Theatre has indicated that this will be the last year of the show, but I encourage them to reconsider. Their production of All Is Calm is worthy of becoming a tradition for the entire family that rings with messages of peace and goodwill towards all.