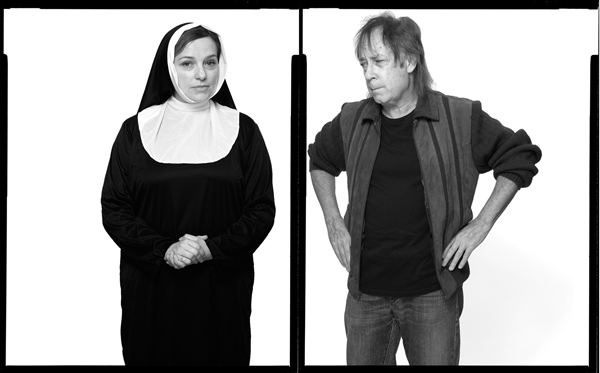 'Little Thing, Big Thing,' or an incredible series of coincidences, both comic and tragic

Sister Martha has been called back to her church in Ireland from Nigeria to assist with the transfer of the closed property to a new owner. Larry O'Donnell, a small time thief with a drinking habit, has broken in to the sanctuary and stolen a valuable statue of Mary. So starts Little Thing, Big Thing, a rousing good creative collaboration between The Midnight Company and Slightly Askew Theatre Ensemble.

Larry's loaded the statue into his van and presumably comes back into the building to see if there's anything else worth stealing. Martha, who is secretly carrying a roll of film she's been asked to deliver to a Nigerian friend currently in Dublin, has just received a frightening call when she and Larry cross paths. The phone rings again and the two are forced to rely on instinct and reaction. It appears many people want the film Sister Martha is hiding, and some of those people are currently tracking her with the aim of securing the film at any cost.

Larry and Martha hightail it away from the church while being chased by men with less than honorable intentions. And guns. The two-person show moves quickly, with all the hallmarks of an action-filled buddy comedy, including the laughs, but an ending that's ever after without much happy. The year is not clearly defined in the show, the musical score and Larry reference the Talking Heads circa 1985, Martha finds a Pussy Riot t-shirt in a secondhand store, still the situation feels alarmingly real and relevant.

The intriguing script, by Donal O'Kelly, is witty and fresh, if predictably familiar. Little Thing, Big Thing has the intrigue of a blockbuster spy movie, but in much cruder, often laugh out loud funny, circumstances. Instead of a new angle, we get global realism, awkward intimacy, and a simple message of hope. There's a multitude of interesting minor characters, although the introduction of the first one may catch you off guard. The sparse set enhances the less glamorous reality of Martha and Larry's circumstances.

In the play, smartly helmed by director Ellie Schwetye and complemented with live music by Jason Scroggins and Will Bonfiglio as Rachel Tibbetts and Joe Hanrahan expertly move between their primary roles and the minor characters. Though there's that moment's confusion at the first transition, the two create various characters without ever losing a grasp on the principle players, Martha and Larry.

Tibbetts is earnest but steely as Sister Martha, with a warm, expressive laugh that changes her entire demeanor. She has more street smarts than she first reveals, with the posture and resolve of a seasoned woman of the cloth. Hanrahan's Larry O'Donnell is an honorable opportunist, at least to his way of thinking. He's also painfully hung over, fast and easy with the truth, and instinctively kindhearted. They need each other for different reasons, and their unaffected humor and easy chemistry creates sympathy that benefits the story.

Schwetye directs Little Thing, Big Thing with purpose and an ear to storytelling. She creates distinct areas, measured transitions, and pointed focus to provide just enough information for the audience to move with the actors. Schwetye astutely paces the show to provide moments for the audience to prepare for the next scene without losing necessary tension. A skilled support team assists the director and includes dialect coach Pamela Reckamp, who guides the actors through myriad accents, and costumer Jennifer "JC" Krajicek, who provides smart, practical designs.

The space is striking, with curved edges, all painted white, that blur the transition from floor to walls to ceiling and a minimalist set. The video design by Michael Perkins shifts with each significant moment and scene via projections ranging from travelogue images to street maps to moody atmosphere. I only wish they were larger and projected directly to the wall. When complemented by the live accompaniment, the effect is enveloping, and the story captivates, inviting as much thought as laughter.

At its heart, Little Thing, Big Thing, The Midnight Company's production in collaboration with Slightly Askew Theatre Ensemble running through February 11, 2017, is about a leap of faith. Martha and Larry recognize and take necessary, if dangerous, chances once both make a commitment to do the right thing. The story is more gritty realism than escapist fun, however, and the things don't turn out as expected. Still, the ending gives one hope that the proverb is true: even the smallest pebble can have a big ripple effect.