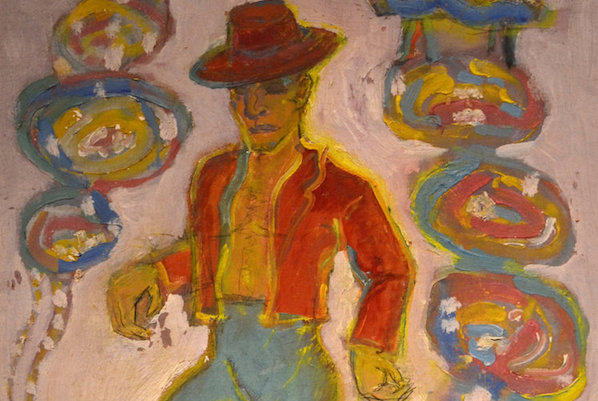 The second annual Tennessee Williams Festival -- St. Louis kicks off this weekend and promises to continue its exploration of the celebrated playwright's St. Louis roots, including special exhibits and events focused on his painting and short story work.

As many fans of American theater and literature are aware, playwright Tennessee Williams spent his formative years in St. Louis. Though he couldn't get far enough away, fast enough, the city left an indelible mark on the young man, with an influence that permeated, and provided a setting for, his later work. An important aspect of the festival in St. Louis are the panel lectures, exhibits, and additional activities, many of them free to the public, that provide a sense of the playwright, his philosophy and driving motivations, and his relationship to St. Louis.

This year, the festival launched the Tennessee Williams New Playwright Initiative and will host a reading of winner Jack Ciapciak's Naming the Dog as part of the opening weekend. The second annual "Stella Shouting Contest," an unexpected highlight at last year's festival, is planned for Saturday afternoon and the 1961 movie adaptation of Summer and Smoke, starring Laurence Harvey, Geraldine Page, and Rita Moreno, will be playing in the Public Media Commons throughout the weekend.

Among the highlights of the festival is "Tennessee Williams: The Playwright and the Painter," an exhibit of the author's work at the St. Louis University Museum of Art hanging from May 5 through July 30, 2017. The exhibit will be featured in an opening weekend panel discussion at the .ZACK on Saturday, May 6, 2017. A second panel, "Magic of the Other" is planned, as is an exhibit of the photographs of Ride Hamilton featuring eye-catching glimpses of actors, in character, at their entrances and exits from stage.

Williams is known for his plays, however; and the festival will present seven shows this year, including Williams' original plays Small Craft Warnings and Will Mr. Merriwether Return from Memphis? These shows open during the first weekend of the festival and continue through May 21, 2017. "Bertha in Paradise," a musical tribute based on the character introduced in The Rooming House Plays at last year's festival, kicks off the festival on Wednesday, May 3, 2017, and continues through May 14, 2017.

Several performances are scheduled to run only during the opening weekend of the festival. Deseo, a reinterpretation of one of Williams' most celebrated plays with a Cuban perspective, in Spanish with English super-titles, is the festival's first international entry. Students from Theatre Program of the University of Illinois at Urbana-Champaign will present St. Louis Stories, a compilation of unpublished short stories written by the author and adapted by Tom Mitchell. ensemble 2.0 a dramatic reading based on Francesca Williams' collection of family letters; and a Tennessee Williams Tribute Magic of the Other, featuring scenes, songs, and poetry, are other highlights from the festival's first weekend.

The Tennessee Williams Festival -- St. Louis aims to distinguish itself by offering unique events in addition to the performances and with scholarly panel discussion of the enigmatic writer. A bus tour highlighting significant St. Louis locations that impacted Williams during his formative years and a tribute featuring local performers are also scheduled for opening weekend. Reviews of the festival plays will be posted after the first weekend. Complete information on the festival, ticket purchase, and additional events such as the New Orleans Jazz Brunch can be found on the festival's website.