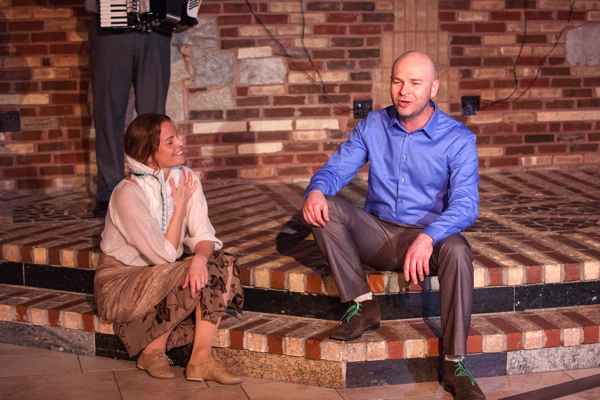 Fontbonne University's 'Bosnian/American: The Dance for Life,' April 21-May 1

It's really more of a pageant and celebration than a play. It's called Bosnian/American: The Dance for Life and it's the fruit of collaboration between Fontbonne University's Bosnian Memory Project and playwright Deanna Jent, a professor in the Find Arts Department and artistic director of the Mustard Seed Theatre.

As you know, St. Louis -- and especially South St. Louis -- has been blessed with massive immigration from Bosnia. In the early 1990's, after the dissolution of Yugoslavia, the remnant Serbia tried to roll back the clock of history some six hundred years -- to when the Ottoman Empire conquered Bosnia-Herzegovina and brought a forced Islamization.

Now the Balkans have a deep and rich and very troubled history. No less than six civilizations have fought through the centuries over the region called Bosnia. For a vivid look into the sufferings of Bosnia under the Ottomans I highly recommend Nobel laureate Ivo Andrič's novel, The Bridge on the Drina.

From 1992 to 1995 at the hands of the Serbian army many thousands of Bosnian Muslims were slaughtered; many thousands fled. Now St. Louis is home to more Bosnian-born people than any city outside Bosnia. And their story has been one of great success. Over the years America has opened its arms to many peoples fleeing the horrors of persecution, of war, of disaster -- from the Pilgrims to the Irish potato famine to this recent genocidal war in the Balkans. And the Bosnian-Americans of St. Louis are proving once again that America truly is the land of opportunity, and that the American Dream is still possible.

The play's first week-end was at the Gribic Banquet Hall, an annex of the beautiful Grbic Restaurant, where the food itself is a glorious celebration of the Bosnian heritage.

The cast of ten portray many characters -- all of whom experienced the traumatic purging of their people from their homeland. We see childhood memories in Bosnia; we see the Starbucks chat of well-assimilated teen-agers in America. We learn of flights to Denmark and to Germany. We see the contrasts among schools: the forced religion classes in Serbia, the demanding standards of German high-schools, the rather easy American schools. We watch the difficulties and rejection encountered by a young Bosnian widow who marries a Serb friend. (My goodness, in Bosnia all the Serbs, Croats and Muslims used to be friendly neighbors!)

Binding these stories together somehow -- dreamily, poetically -- we watch a sort of dance fable. It's the old story of the wolf and the lamb, drawn all the way from Ǽsop. The fable shows that, regardless of all rational arguments, corrupt power will justify itself in devouring the innocent. Here a lamb, Aska, dreams of becoming a ballerina. When she meets the wolf she can only survive by continuously dancing -- it's the Dance for Life. It represents the stalwart, persevering struggle of these desperate immigrants to escape, to find refuge, to settle, to find work, to prosper.

Melissa Gerth does beautiful work as the dancing lamb, supported by the rest of the cast who, donning charming lamb's ears, become a whole baaa-ing flock. The cast includes a mix of Bosnian-Americans and familiar faces of St. Louis actors -- all of whom do fine work. Some of the dialogue is in Bosanski (the Bosnian dialect of Serbo-Croatian), but the meaning is always clear. Director Adam Flores manages his ten actors very nicely on a minimalist set by Kyra Bishop.

It's a most heartening and hopeful evening celebrating the Bosnian-American experience. Running just under an hour, Bosnian/American: The Dance for Life plays Thursdays through Saturdays at 8 p.m. and Sundays at 2 p.m. April 21-May 1. Performances take place at the Fontbonne Fine Arts Theatre on Fontbonne University campus.