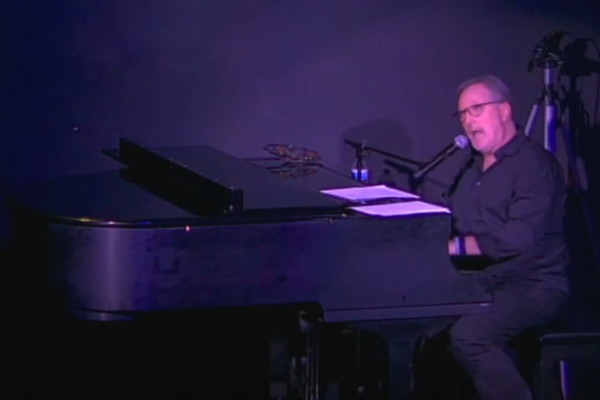 By now, local cabaret fans have gotten pretty familiar with singer, songwriter, and musical director John McDaniel. He is the very model of a modern local boy who made good. From his days doing musical theatre at Kirkwood High School in suburban St. Louis, he has gone on to make a major name for himself on Broadway and television.

Mr. McDaniel has taken to making regular return visits to his home town on or around the holidays, and they have always been welcome. Reviewing his Yuletide appearance at The Blue Strawberry last December, I praised his eclectic set list, his engaging stage presence, and the lively life anecdotes that he used to knit it all together.

After seeing the live webcast of his show "Home for the Holidays (...does Halloween count?)" at the Strawberry last night (Sunday, October 25), I'm happy to report that nothing has changed.  Or at least nothing about Mr. McDaniel's massive talent and happy rapport with the audience has changed. He's still the same charming and entertaining fellow he was when I first saw him at the old Cabaret at Savor venue in 2007, even if there's more gray in his hair and mustache.

The world we're all living in is another matter.

It seems that while we were all enjoying that Christmas show last year, a virus was starting to pop up in China that would infect over 43 million people and kill 1.15 million (so far) world-wide. The impact of SARS-CoV-2 has been felt everywhere, but perhaps most keenly in the performing arts, which rely heavily on the ability to get a bunch of strangers together in an enclosed space—an ideal environment for the spread of an airborne virus.

The result is that most of 2020 has been a difficult time for both performing artists and the organizations that present them. That, combined with the madness that seems to have infected our national political leadership, provided a serious undercurrent to this consistently entertaining and very engaging show.

Certainly it had an impact on the song choices. There was a new McDaniel original titled (I think) "I Just Want to See Your House" that was inspired by many hours spent on Zoom conference calls. "I wrote this in quarantine," he quipped, "because I had time." Another original was the openly political "Vote Like Your Life Depends on It," which took what I always thought was a somewhat ungainly (if inspiring) phrase and actually made a memorable melody out of it. There must not have been that many Trump supporters in the house that night, because the audience response sounded enthusiastic. Or maybe they were just good sports.

Perhaps the most profound reflection of our current political scene, though, came in the form of a pair of songs from "Sticks and Stones," a show Mr. McDaniel wrote with lyricist/librettist Scott Logsdon. Itadapts the Biblical story of David and his triumph over Goliath to address the issue of teen bullying—a problem which has become much worse since a bully took up part-time residence in the White House. Originally planned for a live performance this past July, it became instead a live webcast offered October 16th through 20th as part of National Bullying Prevention Month.

"You're Everything," a song sung to David by his mother, expressed sentiments that many parents have no doubt shared with their own children when they have been victims of bullying: "You must be strong, although it isn't easy / And although you're down, they haven't won the fight / When hope seems lost, it's harder to remember / That though it's dark, there always will be light." It was a lovely and touching thing, as was the other number "Choose to Be Kind." It's the show's finale, and the opening stanza felt particularly relevant right now: "When you're mean, what joy can you find? / Choose to be kind." Truer words have never been sung.

There were plenty of other emotionally powerful moments in the evening. His moving rendition of Kenny Asher and Paul Williams's "You and Me Against the World" was a fine tribute to the late Helen Reddy, with whom Mr. McDaniel worked in 2014. I also thought his opening medley of Jason Robert Brown's "Hope" and Melissa Manchester's "Come in From the Rain" worked exceptionally well. His encore—the whimsically melancholy "I Wish You a Waltz," from the often-revised but never successful 1978 musical "Ballroom"—was thing of beauty as well.

That's not to say that the evening was all that solemn, on the whole. Mr. McDaniel is far too skillful a performer to present anything other than a well-balanced program, and there were plenty of chuckles to go with the more moving stuff.  That included Rodgers and Hart's classic "list" song "Manhattan" (composed for the 1925 revue "Garrick Gaieties") with all four brilliant and witty choruses, the ingenious "Rhode Island is Famous for You" from the 1948 Dietz and Schwartz show "Inside USA" (in which each state got its own number), and "Plenty of Pennsylvania" (from the 1955 show "Plain and Fancy").

His Hallowe'en-specific re-write of the old Perry Como hit "Home for the Holidays" was tremendous fun. And there were also songs that were fun without being funny, like Elton John's "Mona Lisas and Mad Hatters" from "Honky Chateau," the 1972 album that was his first big hit in the USA.

Mr. McDaniel preceded that encore by thanking the physically distanced but enthusiastic audience for being there. "I'm been doing shows in my living room for eight months," he wryly observed. "As you finish the song, you imagine people clapping." So being in front of a live audience was "pretty awesome."

Shows continue at The Blue Strawberry, which is operating under a "COVID careful" arrangement. That includes mandatory masking, restricted indoor capacity, and other precautions. Many of the shows, like Mr. McDaniels's, are also offered as live Internet streams—a real plus for those of us who are still not entirely comfortable with many public performance venues. If what I saw last night is any indication, the live stream is the next best thing to being there. Check their web site for details.