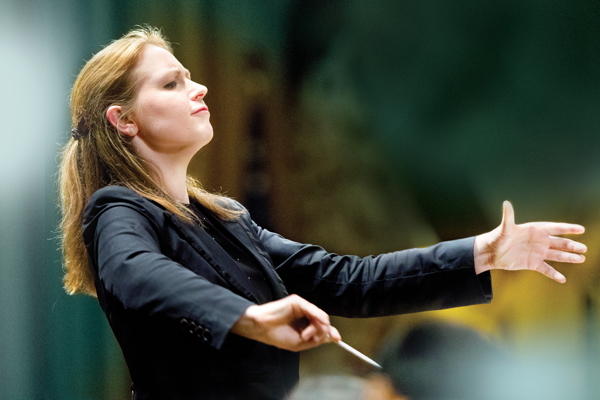 Symphony Preview: Something old, someone New

The St. Louis Symphony Orchestra's 18/19 season opens this weekend (Saturday and Sunday, September 22 and 23) with a mix of the old and the new--in more ways than one.

There's the music, to begin with. The major works on the program are old favorites: the stirring tone poem "Finlandia" by Sibelius, Grieg's tuneful Piano Concerto, and Edward Elgar's "Enigma Variations." But there's also a relatively new piece: "Musica celestis" by the prolific American composer Aaron Jay Kernis, whose credits range from the New York Philharmonic to the Walt Disney Company. It was first performed by the San Francisco Symphony in 1992 and is getting its St. Louis premiere this weekend.

And then there are the performers. The SLSO certainly counts as old, having been founded in 1880, but this weekend's piano soloist is Behzod Abduraimov, who is around the same age as Mr. Kernis' piece (Mr. Abduraimov was born in 1990). And the conductor is, to paraphrase James Bond, "New. Gemma New."

Ms. New, as you probably know, was appointed Resident Conductor of the SLSO back in 2016. That means she's the Music Director of the SLSO Youth Orchestra and also works on the orchestra's various educations and community outreach concerts. Her appearance conducting a regular season concert last spring drew rave reviews--my KDHX colleague, Gary Scott, wrote that she "directed brilliantly, exhibiting poise and control"--so it will be interesting to see how she does this weekend.

I'm also looking forward to the local debut of Mr. Abduraimov. Described as "a new superstar pianist" in a 2012 NPR profile, he has had praise heaped upon him for his work in the Russian repertoire, notably Rachmaninoff and Tchaikovsky. I couldn't find any reviews online pairing him with the Grieg concerto, although his performance this May of the piano part in Grieg's Cello Sonata in A minor was described as "understated but devastating" by the Washington Classical Review, which bodes well.

I probably can't tell you much about the two "greatest hits" on this weekend's program that you don't already know. The patriotic fervor that moved Sibelius to write "Finlandia" is well known, as is the importance of Norwegian folk influences in the Grieg concerto. Less well known is the fact that Grieg was unable to attend the premiere of the work--one of seven "interesting facts" provided by Shari Mathias in program notes for the Parker (Colorado) Symphony Orchestra earlier this year.

As for new work on the program, "Musica celestis," it started out as the slow movement of the composer's String Quartet No. 1 (also titled "Musica celestis") but soon gained an independent life of its own. The title translates as "heavenly music", as the composer observes in notes on the string quartet original:

The second movement musica celestis, is inspired by the medieval conception of that phrase which refers to the singing of the angels in heaven in praise of God without end. "The office of singing pleases God if it is performed with an attentive mind, when in this way we imitate the choirs of angels who are said to sing the Lord's praises without ceasing." (Aurelian of Réöme, translated by Barbara Newman) I don't particularly believe in angels, but found this to be a potent image that has been reinforced by listening to a good deal of medieval music, especially the soaring work of Hildegard of Bingen (1098-1179). This movement follows a simple, spacious melody and harmonic pattern through a number of variations (like a passacaglia) and modulations, and is framed by an introduction and codas.

The theme of the new SLSO season is "From Our Family to Yours," which makes the concluding work on the program, Elgar's "Enigma Variations," an ideal fit. Effectively a musical family album, the fourteen variations are vivid little sound portraits of Elgar, his wife, and his friends. Even a pet bulldog puts in an appearance in a comical variation (number 11) that portrays the dog tumbling down a grassy bank into the river Wye and then, according to the composer, "paddling up stream to find a landing place (bars 2 and 3) and his rejoicing bark on landing (second half of bar 5)."

The "Enigma" of the title, according to Elgar, refers to "another and larger theme" which is "not played". The composer never revealed what that theme might be and speculation has been lively ("most convincingly Auld Lang Syne," according to the late British musicologist Robin Golding in liner notes for the Sir Adrian Boult recording) but I'm inclined to go along with the school of thought that the "theme" to which Elgar referred wasn't musical at all but rather the common thread of friendship and good humor that pervades the music.

P.S.: the first concert of the season always has a celebratory air, and this time it will be accompanied by a champagne toast in the Wightman Grand Foyer at intermission.