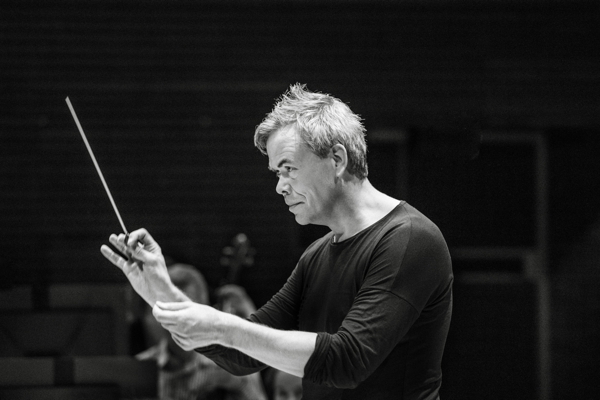 Attendance at the St. Louis Symphony Orchestra concert this past Saturday (September 29th) was rather light. Which was a shame, since it brought us a pair of impressive performances by violinist Leila Josefowicz and guest conductor Hannu Lintu.

Maestro Lintu is no stranger to the Powell Hall stage, having made several appearances here over the years, most recently in an all-Russian program this past April. He is a commanding and visually compelling figure on the podium who has a nearly ideal mixture of romantic intensity and intellectual control.

That combination of passion and precision was most obvious in the work that concluded this weekend's concerts, Dmitri Shostakovich's massive Symphony No. 11 in G minor, Op. 103, (subtitled "The Year 1905"), but you could see it in the newer works comprised the first half of the concert as well.

The evening opened with the American premiere "Flounce" by Finnish composer Lotta Wennäkoski (b. 1970). A commission by the BBC for its 2017 Proms concert series, Flounce, which clocks in at a brief five minutes, is something of an audio funhouse in which short phrases leap up like flying fish from (to continue the metaphor) a churning musical sea. The work opens with an exuberant orchestral outburst which soon gives way to more delicate textures that call for a wide variety of unusual techniques from the players before building again to a big and comically abrupt finish.

Among those unusual techniques, as Tim Munro observes in his program notes we see:

Brass players blow tone-less air through their instruments, producing gusts of white noise. Trumpeters slap their mouthpieces with palms, giving a popping sound, while trombonists make clacking noises with their tongue. Clarinetists clutch hard and quickly release the reed with their tongues, producing a sharp noise called a "slap tongue."

The string players get to make their share of odd noises as well by bouncing their bows, pressing them hard against the strings, playing on the "wrong" side of their bridges. "A single bass player," Mr. Munro writes, "makes a breathing sound by playing the wood below their strings (the tailpiece)."

Add a percussion section that includes a slide whistle, a Super Ball (by Wham-O, as seen on TV!), a "U-shaped vibraslap, the descendant of an instrument made from jawbones, emitting a rattle," and "a long tube filled with beans to produce the calming sound of rain" and you have a collection of noisemakers that even Spike Jones might have envied.

All this should be fairly entertaining, and it mostly is, although many of the more outré sounds were, at least in this performance, lost in the overall orchestral din. This is, I suspect, one of those works that will come across better on recordings than it does live. It's certainly easier to hear orchestral details in the BBC recording of the world premiere than it was in Powel Hall.

That said, the musicians of the SLSO did a bang-up job of it all, playing with enthusiasm and precision. Given the difficulty of the score and the quality of the performance, the response from the relatively small audience was disappointingly tepid. I can understand the lack of enthusiasm for the work itself--it's the sort of thing that doesn't much invite repeated hearing--but Mr. Lintu and the orchestra deserved longer and more enthusiastic applause for their hard work.

Up next was the St. Louis debut of the 2009 Violin Concerto by another of Mr. Salonen's fellow countrymen, Esa-Pekka Salonen (b. 1958). Best known as the Music Director of the Los Angeles Philharmonic from 1992 to 2009, Mr. Salonen, like Mr. Lintu, studied conducting with Jorma Panula at the Sibelius Conservatory. This weekend's soloist, Ms. Josefowicz, worked closely with Mr. Salonen during the composition process and gave the work its world premiere.

In notes for the Violin Concerto on his publisher's web site, Mr. Salonen points out that his goal was "to cover as wide a range of expression as I could imagine over the four movements of the Concerto: from the virtuosic and flashy to the aggressive and brutal, from the meditative and static to the nostalgic and autumnal." I'd say he succeeded, although to my ears the work had an undercurrent of neurasthenic anxiety that lent an edge to even the more tranquil moments.

You can hear that nervous energy most clearly in the opening movement, titled "Mirage." Starting almost in midphrase, "as if the music had been going on for some time already" (to quote Mr. Salonen), the solo line dashes up and down in a brilliant "perpetual motion" display and while the emphasis shifts periodically to other parts of the orchestra the violin remains the focus of the movement and, indeed, the work as a whole.

Not for Mr. Salonen the alteration of solo and tutti passages of the classic concerto. Here the soloist plays more or less nonstop for the work's entire half-hour run time and employs just about every technique in the book. It's the sort of work that only a true virtuoso would attempt.

Needless to say, Leila Josefowicz is exactly that kind of virtuoso. Her technique was flawless, even in the most demanding passages (of which there are many). More importantly, though, she faithfully conveyed the wide range of moods Mr. Salonen was striving for. That included the somewhat nervous dreaminess of the second movement (titled "Pulse I"), the wild, jazzy excess of the "Pulse II" third movement ("Something very Californian in all this," writes Mr. Salonen. "Hooray for freedom of expression.") and the nostalgic sense of farewell in "Adieu," the final movement.

This time around the audience's applause was sustained and enthusiastic. Ms. Josefowicz's performance had great physical energy, virtuoso flair, and good, close communication with Mr. Lintu. She deserved every bit of the standing ovation she received. Also singled out in curtain call bows for their solo work during the concerto were Associate Principal oboe Phil Ross, Assistant Principal viola Jonathan Chu, and Principal cello Daniel Lee.

The Shostakovich symphony took up the second half of the program. Indeed, at nearly 70 minutes, it was almost twice as long as the entire first half. Written in 1957, this sprawling, cinematic work was, publicly, a memorial to the "Bloody Sunday" massacre of a group of unarmed protestors by the Imperial Guard of Tsar Nicholas II on January 9th, 1905. It was a key event in the 1905 Russian Revolution which led, in turn, to the overthrow of the Tsarist regime in 1917. Privately, though, Shostakovich apparently had a different act of political violence in mind: the bloody repression by Soviet forces of the Hungarian uprising in October of 1957. "Don't forget," he said to choreographer Igor Belsky, "that I wrote that symphony in the aftermath of the Hungarian Uprising." (cited in "Shostakovich: A Life Remembered" by Elizabeth Wilson).

When I saw Mr. Lintu conduct Shostakovich's harrowing Symphony No. 8 back in 2015, I was very taken with the way his perfectly calibrated interpretation honored the composer's every note. I heard that same degree of keen musical insight in his approach this time as well.

There is usually a mix of horror, beauty, tragedy, and triumph in Shostakovich's more mature symphonies, and the Eleventh is no exception. Despite the work's epic length, it grabs the listener's attention from the ominous, wintry string chorale and distant trumpet and horn calls of the opening and doesn't let up until the defiant finale. Yes, the graphic musical description of the massacre in the second movement is the sort of thing that apparently moved British musicologist Robert Layton to describe Shostakovich (in the 1967 Penguin Books edition of "The Symphony") somewhat dismissively as a "documentary composer," but I think Shostakovich transmuted those external experiences into something that transcended external influences.

Mr. Lintu and the musicians delivered that sound with tremendous power. There was a number of striking solos throughout the work, including Cally Banham's mournful English horn and Tzuying Huang's bass clarinet in the final movement.

That final movement, by the way, concludes with a massive G minor chord on the tubular bells, openly contradicting the orchestra's more optimistic G major chord. The combined sound of the bells and gong has a long decay time, and Mr. Lintu clearly intended that chord to slowly die away before lowering his arms and turning to accept the audience's applause. Some of the audience didn't wait for that to happen Saturday night. Mr. Lintu looked bemused. I don't blame him. The enthusiastic ovation was deserved, but giving the work a few seconds to truly end would have been more respectful.

From St. Louis, Mr. Lintu moves on to guest spots in Baltimore, Boston, Tokyo, Singapore, and Cincinnati before returning to Finland and the Finnish Radio Symphony Orchestra. He currently has no return engagement scheduled with the SLSO, but given his apparent popularity with both audiences and orchestral management, I expect that we will be seeing him again before too long.

Next at Powell Hall: Bramwell Tovey conducts The St. Louis Symphony Orchestra and viola soloist Beth Guterman Chu Friday at 10:30 am and Saturday at 8 pm, October 5 and 6. The program consists of Beethoven's Symphony No. 6 ("Pastorale") and Berlioz's "Harold in Italy." Then Ben Whiteley conducts the orchestra, chorus, and vocal soloists in "A Celebration of Muny at 100" on Sunday, October 7, at 3 pm. The concerts take place at Powell Hall in Grand Center.