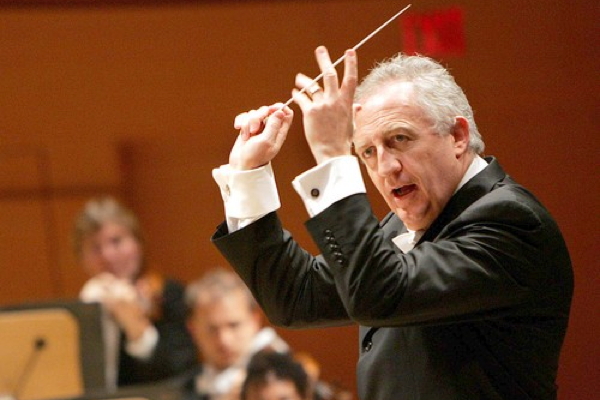 The weekend got off to a great start this morning (Friday, October 5th) as Bramwell Tovey conducted the St. Louis Symphony Orchestra in a pair of big 19th-century symphonies by Beethoven and Berlioz. The onstage energy was a nice complement to the coffee and Krispy Kreme doughnuts in the foyer.

The concert opened with Beethoven's Symphony No. 6 in F major, Op. 68 (the "Pastoral"), a work infused with the composer's love for nature. "How glad I am to be able to roam in wood and thicket, among the trees and flowers and rocks," he once wrote. "No one can love the country as I do." You can hear that love of the natural world everywhere in the sixth symphony: the imitation of birdsong in the second movement, the earthy peasant dance of the third, and the dramatic thunderstorm of the fourth. It's music that brims with love and good cheer.

It got a big, appealing, and beautifully thought-out performance from Mr. Tovey and the orchestra. There was just enough variety in the way individual phrases were shaped to give the music a nice sense of variety without ever engaging in exaggeration. Tempi were ideal, including (for example) a good, steady pulse in the Andante molto mosso second movement. "Andante" is often described as "at a walking pace," and it was easy to think of the composer strolling through the fields in this performance.

Mr. Tovey got outstanding performances from the musicians Friday morning. The strings sounded warm and solid and the woodwinds were at the top of their game. Thanks to Associate Principal Oboe Phil Ross, Principal Flute Mark Sparks, and clarinetists Scott Andrews and Benjamin Adler for those perky bird calls in the second movement.

Nature also plays a big role in the second work on the program, Berlioz's dramatic "Harold in Italy," Op. 16, for solo viola and orchestra. The "Harold" of the title is the protagonist in Lord Byron's epic poem "Childe Harold's Pilgrimage," a character who is, as Thomas May points out in his program notes for the SLSO, "a melancholy young man who wanders through the Mediterranean seeking escape from his disillusionment with life." He's represented by the viola, which wanders into and out of Berlioz's vivid musical canvas without ever really becoming part of it.

The soloist this weekend is SLSO Principal Viola Beth Guterman Chu who, according to her interview in the program, strongly identifies with the composer's depiction of Harold. "Harold is a dreamer," she observes. "He is melancholic, but also innocent. Playing the piece suits my musical temperament." I could certainly hear that sympathetic understanding of the character in her committed, virtuoso performance. While not flashy, the solo line nevertheless has significant technical challenges, which she overcame with apparent ease.

I think he might also have approved of Mr. Tovey's staging decisions. "Harold in Italy" isn't so much a viola concerto as a symphonic work in which the viola sometimes plays a prominent role. Rather than keep Ms. Chu on stage for the long stretches during which her instrument is silent, Mr. Tovey chose to have her enter, exit, and move across the stage according to her instrument's role in the music. The score directs the soloist to "stand in the fore-ground, near to the public and isolated from the orchestra" ("L'exeeutant doit étre place sur l'avant-scene, pres du public et isole de l'orchestre") but doesn't specify how to get there.

That could have been distracting or come across as a gimmick, but I thought it worked exceptionally well. In the first movement, for example, she was offstage until the viola's first appearance, at which point she entered stage right and, as directed in the score ("La Harpe doit étre placee pres de l' Alto solo"), stood next to harpist Allegra Lilly for their duet. In the second movement, for the sequence in which the viola plays ethereal glissandos against a plodding line in the basses (playing the role of marching pilgrims), Ms. Chu was far stage left, next to the basses. In both cases, the visual choices enhanced and clarified the music.

Besides, the composer himself was not averse to that sort of thing. The offstage string trio that accompanies the viola's final appearance in the finale, for example, was all his idea.

The Berlioz/Beethoven concert repeats tomorrow night (Saturday, October 6) at 8 pm, a performance which will also be broadcast live on St. Louis Public Radio. The on Sunday at 3 pm, Ben Whiteley conducts the orchestra, chorus, and vocal soloists in "A Celebration of Muny at 100." The concerts take place at Powell Hall in Grand Center.

[Corrected to include the composer's stage directions in the score.]