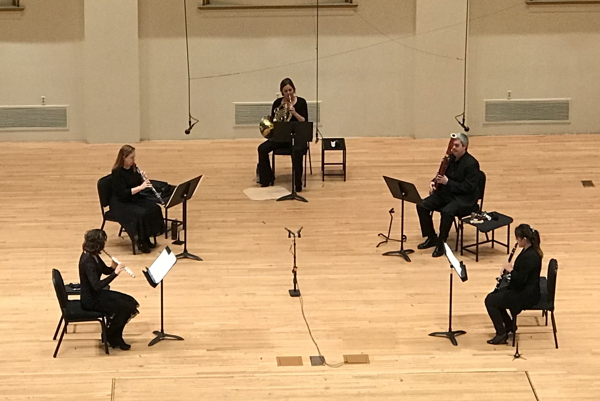 The St. Louis Symphony Orchestra's (SLSO) chamber music festival continued its second and final week on Saturday, November 7th, at 11 am with a lively, witty, and whimsical program of music for wind quintet by Jacques Ibert, Samuel Barber, György Ligeti, and Valerie Coleman. It was just the thing for a pleasant fall morning when I hadn't had quite enough caffeine.

The concert began with "Trois pièces brèves" (Three Short Pieces) by Jacques Ibert, a mid-20th century French composer noted for his eclectic approach to composition ("all systems are valid," he once noted) and his extensive work for the stage and screen.  In fact, his  "Trois pièces brèves" were originally part of a score for a French version of the Restoration comedy "The Beaux's Stratagem," so it's no surprise that they sparkle with wit and good humor.

The members of the SLSO's wind quintet had great fun with it, and played the many solo bits with clarity and precision. Tzuying Huang on clarinet and Ann Choomack on flute had a lovely duet in the second movement, while Cally Banham had a terrific solo on oboe in the third. Bassoonist Andrew Cuneo and Julie Thayer on horn had more than their share of fine moments as well. The entire ensemble played with that combination of grace and accuracy that is so essential for this work.

In fact, the members of the ensemble were pretty much perfect throughout the concert, even though three of them were playing something other than their primary instruments. Cally Banham usually plays cor anglais rather than oboe, Ann Choomack usually plays piccolo, and Tzuying Huang is more often heard on the bass clarinet. That's just icing on the cake for me.

Samuel Barber's "Summer Music," op. 81 was a sharp contrast, with a primarily languorous mood set by the opening theme and Mr. Cuneo playing at the very top of his register. Barber composed this, his only work for wind quintet, in close collaboration with the New York Wind Quintet, guaranteeing that the result would be a good fit for each of the instruments and would allow the players to show off their expertise. That they certainly did, and here's an extra thumbs up for Cally Banham's contemplative oboe solo towards the end.

By way of contrast, Ligeti's "Six Bagatelles for Wind Quintet" was anything but languid. This is energetic, spiky music, which is, like the work of his fellow Hungarian Béla Bartók, often drawn from folk influences, especially in the final movements. It sounds difficult to play, but the quintet more than did it justice.  Ms. Choomack deserves a shout-out for sailing through some especially tricky bits for the flute and piccolo.

The concert ended with a romp through flutist and composer Valerie Coleman's "Tzigane," which as its title implies, is an energetic take on Eastern European/Romani folk sounds—a logical segue from Ligeti's "Bagatelles." To my ears, there was more than a dash of Klezmer here as well. Ms. Coleman's score leaves room for some improvisation by the players, including a cadenza near the very end, played with virtuoso dash by Ms. Huang.

The SLSO's chamber music festival concluded on Sunday, November 8th, but the new fall program continues through November 21st. Audience size for all these concerts is limited to 150 for each performance and tickets can only be purchased by calling the SLSO box office at 314-534-1700. Only two tickets can be purchased per household. Information on the SLSOs COVID-19 safety protocols is available at the orchestra's web site.