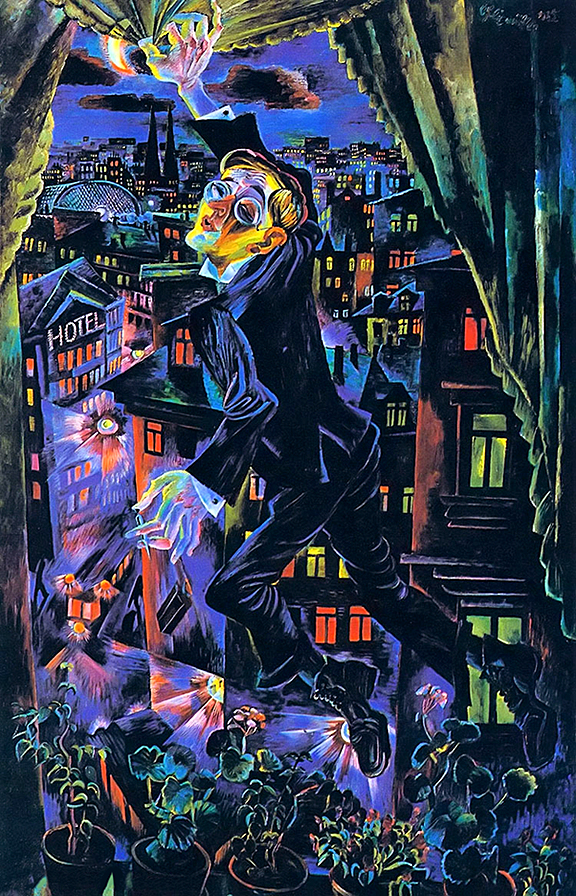 Symphony Preview: The dance of love and death

“It's very important,” said St. Louis Symphony Orchestra (SLSO) Music Director Stéphane Denève in a 2019 interview, “that the audience understand that the new music we will perform is music that I believe they can love. It is true that my preference is for music that is very emotional, that is often very tonal, and that has a lot of melodies.”

He has proved that repeatedly in his choice of contemporary compositions over the last couple of years, and he has done it again with “Death of the Poet,” the work that opens this weekend’s concerts (May 13-15). Written by Philadelphia-based composer TJ Cole in 2014, “Death of the Poet” was inspired by “Death of the Poet Walter Rheiner” by German expressionist painter Conrad Felixmüller. A close friend and artistic collaborator of Felixmüller, Rheiner became addicted to cocaine and morphine, dying of an overdose of the latter in a shabby Berlin flat in 1925.  Felixmüller’s painting depicts the poet floating out of a window in the garish light of a surrealistic urban night. “It was overwhelming,” Cole says of their first viewing of the painting. “These dark colors—deep purples and blues and greens.”

Cole’s musical response to that experience is an essay for string orchestra that has an emotional resonance not unlike the second movement of Beethoven’s “Eroica.” Like Beethoven’s Marche funebre, it begins with a slow processional (very slow, in this case) in the lower strings. The upper strings add a nervous trilling motif as the music slowly builds to an anguished outcry for the full orchestra before slowly diminishing again until there is nothing left but that nervous trill, fading and then abruptly cut off—as was Rheiner’s life.

If you want to experience this work for yourself, the composer has provided a recording by the Curtis Symphony Orchestra on Soundcloud. It’s powerful stuff.

The mood lightens considerably for the next work on the program, the Violin Concerto in E minor, op. 64, by Mendelssohn, a work which the great violinist Joseph Joachim once described as “the heart's jewel.”

It’s a jewel that apparently required a lot of polishing.

Although the composer announced his intention to write the concerto in a letter to his friend, the violinist Ferdinand David, in 1838, it wasn't until March of 1845 that the E minor concerto finally saw the light of day. Mendelssohn was ill at the time, so the Danish composer Niels Gade conducted the Leipzig Gewandhaus Orchestra (where Mendelssohn had been Principal Conductor since 1835) with David as the soloist. Which was only fair, as the composer sought David's technical and compositional advice throughout the concerto's six-year gestation period.

The concerto was an immediate success and is now one of the most frequently played violin concertos in the repertoire. Audiences never seem to tire of it and fiddlers never fail to find something new in their interpretations. Julian Rachlin put his stamp on it the last time the SLSO performed the work in 2018, with David Robertson on the podium. This time around the soloist will be Second Associate Concertmaster Celeste Golden Boyer, whose previous starring roles with the SLSO have included Beethoven’s Triple Concerto (with Jun Märkl) and Cindy McTee’s “Einstein’s Dream" (with Leonard Slatkin).

The concerts will conclude with Beethoven’s “right trusty and well-beloved” Symphony No. 7 in A major, op. 92. First performed at a December 8, 1813, charity concert to benefit widows and orphans of soldiers killed in the Battle of Hanau—which marked the beginning of the end of Napoleon's dreams of empire—the work was greeted with wild acclaim by audiences and critics alike. The second movement Alegretto, in particular, "enchanted connoisseur and layman," according to a contemporary review in the Allgemeine Musikalische Zeitung.

Perhaps the most famous and most enthusiastic review of the Seventh, though, came from Richard Wagner. It's so effusive it's worth quoting at length:

All tumult, all yearning and storming of the heart, become here the blissful insolence of joy, which carries us away with bacchanalian power through the roomy space of nature, through all the streams and seas of life, shouting in glad self-consciousness as we sound throughout the universe the daring strains of this human sphere-dance. The Symphony is the Apotheosis of the Dance itself: it is Dance in its highest aspect, the loftiest deed of bodily motion, incorporated into an ideal mold of tone.

Now THAT is a boffo notice.

The Essentials: Stéphane Denève returns to conduct the final concert of the season with Beethoven’s Symphony No. 7, Mendelssohn’s Violin Concerto with Second Associate Concertmaster Celeste Golden Boyer, and “Death of the Poet” for strings by contemporary American composer TJ Cole. Performances are Thursday through Saturday at 7:30, May 13-15. Only 300 tickets will be sold for each performance, and strict health protocols will be in place. For more information, visit the SLSO web site.