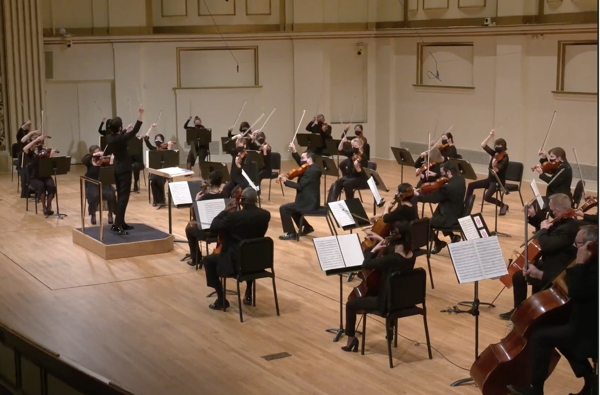 “Spring work,” wrote famed naturalist John Muir, “is going on with joyful enthusiasm.” By that standard, there is over an hour of spring work on display in the St. Louis Symphony Orchestra (SLSO) digital concert that’s available for on-demand streaming through July 24th, 2021.

[Find out more about the music with my symphony preview of the original concert.]

Recorded at Powell Hall April 9-11 and originally reviewed by me back then, the concert features the SLSO’s newly appointed Assistant Conductor Stephanie Childress leading the SLSO strings in a cheerfully blooming program of music by Britten, Dvořák, and contemporary British composer Sally Beamish.

As Ms. Childress notes in her introductory comments, the common thread among the three works is childhood. Britten used tunes recycled from his youthful compositions (he began writing at the age of 5) in his “Simple Symphony”; Dvořák’s “Serenade for Strings” was inspired, in part, by the birth of his first child; and Beamish dedicated “The Day Dawn” to her friend Christine McKemmie, whose daughter Zoe had just died. “[T]he piece symbolizes new beginnings,” she wrote, “recalling the sense of calm Chris felt on the day of the funeral, dawning bright after a week of rain.”

Originally written with student ensembles in mind (and when the composer himself was only 20), Britten’s symphony is, in indeed, simple enough for both young audiences and performers, but it’s also sophisticated enough to appeal to adults. And in the hands of a polished professional ensemble like the SLSO strings, it yields delightful details of wit and nuance that might escape less experienced players.

This is very apparent in Ms. Childress’s interpretation, which brings out the rambunctious fun of the “Boisterous Bourrée” first movement, delivers delicate and cheerful precision in the “Playful Pizzicato” second, and is sweetly nostalgic in the “Sentimental Sarabande.” A lively romp through he “Frolicsome Finale” brings the entire business to a most successful conclusion. Indeed, the echoes of that last movement continued to frolic in my memory for days afterwards.

Beamish’s “The Day Dawn” is a more serious affair for a larger ensemble (around 40 players, twice the size of the Britten symphony) and with a degree of musical detail that can be both heard and seen clearly in the HD video. Opening with an early spring sunrise in the low strings followed by a pop-up thunderstorm and a return to sylvan tranquility, it’s a richly evocative piece that conjures up images of the Scottish highlands and the Shetland islands that provided the work’s titular folk tune.

That tune is heard most clearly in the dramatic central section and again at the very end, played simply and sweetly by violinists Celeste Golden Boyer and Erin Schreiber in a close-up shot that makes it easy to admire their concentration. But it seems to me that the tune lies at the heart of the sonically layered and richly contrapuntal body of the work as well. The orchestra plays it with heart and polish under Ms. Childress’s sympathetic direction.

Dvořák’s Op. 22 “Serenade,” which dates from May 1875, concludes the program. It’s a work that has always been a favorite of mine and, based on her video comments, a favorite of Ms. Childress’s as well. Certainly her reading of it was loving and finely shaded—clearly the product of someone attuned to the sunny springtime mood that permeates the serenade’s five melody-saturated movements.

That said, there are times when I find her approach perhaps a bit too loving and lyrical. I would have preferred a brisker tempo in the Moderato opening movement, for example, and a bit less lingering over the poetic trio section of the Tempo di valse second movement. There is, on the other hand, a bracing energy to both the Scherzo and the final Allegro vivace as well as real beauty in the sentimental Larghetto, so on the whole I can’t complain. It’s a fine performance, and perfectly played by all concerned.

This was Stephanie Childress’s debut as a conductor (she appeared as a violin soloist with the orchestra March 26-28), and it was intriguing to watch her at work when I saw the original concert of April 9. Her podium style was elegant and precise, neither flamboyant nor overly reserved. I had the sense that she felt great confidence in the expertise of her orchestra and was content to simply keep them moving in the direction they had already carefully rehearsed. The video close-ups of her strongly reinforce those initial impressions.

London Symphony violinist Hugh Bean once opined that conducting “is the strongest evidence I’ve yet seen that telepathy, in one form or another, exists.” Seeing Ms. Childress in action, I’m inclined to agree.

Available through July 24, this is the first in a summer series of digital recordings of concerts by the SLSO from this past spring. If you missed them live, this is a golden opportunity to see them in the comfort of your own home. For more information, visit the SLSO web site.