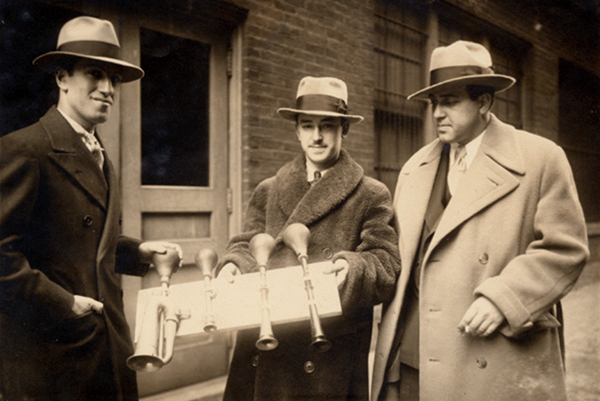 The annual New Year’s Eve concert by St. Louis Symphony Orchestra (SLSO) has been a celebratory event for many years now. It was cancelled last year because of the pandemic but it’s back again in 2021, with Music Director Stéphane Denève at the podium, just as he was in 2019. But regulars will notice a few changes.

To begin with, 2021 brings us not one but two New Year’s Eve Celebrations: the usual concert at 7:30 and a new matinee at 2 pm. The program is identical for both, but the addition of the afternoon performance should allow more music lovers to attend (the evening is usually sold out in advance) and make it easier to include bring the entire family. Adults with nighttime party plans should also appreciate it.

The second big change is that this year some of the program is being announced in advance. In the past the orchestra’s playlist was a closely guarded secret until concert time. Most of it still is, but at least we know that the evening will bring us two major works by Gershwin and a new piece by Missouri composer Stefan Freund: the “Voyageur Fantasy” for horn and orchestra, a work inspired by the folk songs of Missouri’s French Canadian settlers.

The Freund work is receiving its world premiere, so I have no idea what it will sound like. I will, therefore, refer you to the conversation between Freund and SLSO Principal Horn Roger Kaza, the evening’s soloist, on the SLSO Stories site, for details.

The two big Gershwin pieces, on the other hand, are old friends for most of us: the 1924 “Rhapsody in Blue” and the 1928 tone poem “An American in Paris.” Both will be heard in versions that differ from the composer’s original but, what the heck, it’s New Year’s Eve and I’m disinclined to be a curmudgeon.

“Rhapsody in Blue” first saw the light of day as part of "An Experiment in Modern Music," as bandleader Paul Whiteman billed the February 12, 1924 concert by his Palais Royal Orchestra at New York's Aeolian Hall. The “Rhapsody” was the most memorable piece to emerge from Whiteman's experiment although there were some other fun nuggets in it as well. You can hear them on Spotify in a recreation of the entire concert under the baton of Maurice Peress that was released in 1987.

In 1924 Gershwin was still new to the classical game and not comfortable with arranging his own music, so the orchestration for that world premiere was done by composer Ferde Grofé (best known for his “Grand Canyon Suite”). It was a snappy, typically 1920s arrangement for jazz band—which is what Whiteman’s group actually was, the ersatz French name notwithstanding. Grofé went on to produce two more arrangements, one for theatre orchestra in 1926 and one for a full symphonic orchestra in 1942.

The 1942 version is, as far as I can tell, the one Denève will be conducting New Year’s Eve. Indeed, that’s the only version most people ever heard until 1971, when Samuel Adler recorded his own reconstruction of the original jazz band arrangement.  The soloist will be Michelle Cann, a member of the Curtis Institute faculty who is very active as an orchestral soloist, recitalist, and radio host. This will be her St. Louis debut.

By the time Gershwin completed “An American in Paris” in 1928, he was much more confident of his ability to handle an orchestra. Begun during a trip to Paris two years earlier, the work is a reminder of just how much solid craftsmanship lurks behind Gershwin’s irresistible tunes.

"This new piece," observed Gershwin in a 1928 interview in Musical America, "really a rhapsodic ballet, is written very freely and is the most modern music I've yet attempted. The opening will be developed in typical French style, in the manner of Debussy and The Six, though the themes are all original. My purpose here is to portray the impressions of an American visitor in Paris, as he strolls about the city, listens to the various street noises, and absorbs the French atmosphere."

As someone who has visited Paris several times and who has fallen in love with the City of Light, I have to say it works beautifully. The lively opening with its colorful evocation of the city's lively sidewalk cafes and bustling boulevards (complete with honking taxi horns in the percussion section) is a masterful bit of musical imagery. And the bluesy central section evokes not only the homesickness of the traveler but also the charm of Paris at night.

Gershwin’s orchestration of "An American in Paris" is a reminder of how far he came in such a short period of time. This is, after all, a guy who went from being a Tin Pan Alley "song plugger" to an accomplished composer and orchestrator in only thirteen years. In another seven years he would write one of the mainstays of twentieth century American opera, "Porgy and Bess.”

Even so, others couldn’t resist tinkering with Gershwin’s score. Conductor Walter Damrosch cut 120 bars before the first performance, and Frank Campbell-Watson produced a revision that is still the standard for most orchestras. Restorations of the composer’s original were created by Jack Gibbons in 2000 and by Mark Clague, director of the Gershwin initiative at the University of Michigan, in 2017, but neither seems to have gotten much traction. So this December 31st, we’ll be welcoming in the new year with Gershwin by way of Campbell-Watson.

There’s much more to the New Year’s Eve program, as you’ll discover when you attend one of the concerts or listen to the live broadcast on St. Louis Public radio at 7:30 on New Year’s Eve. Either way, have a glass of something bubbly and join us to bid a farewell to 2021 that will be fond and/or relieved.