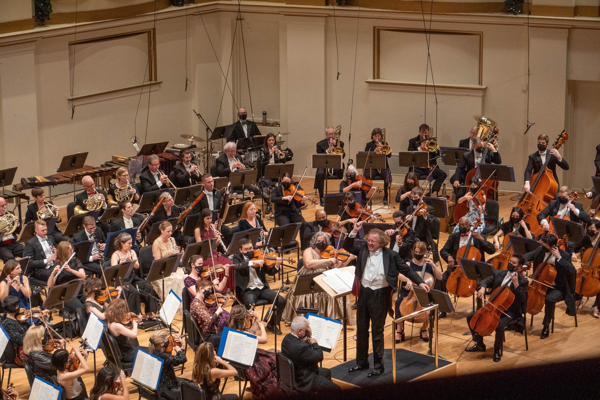 Symphony Review: At the SLSO, the '20s then and now

The year 1921 was no picnic. Traumatized by political violence, a ruinous and ultimately pointless foreign war, and a pandemic that killed more people than the war itself, Americans were ready to celebrate. The result was a decade of irrational exuberance known as “the roaring twenties.” That exuberance was distilled, refined, and transmuted into musical art by one of the last century’s great composers, George Gershwin.

As St. Louis Symphony Orchestra Music Director Stéphane Denève noted in his opening remarks for the SLSO’s New Year’s Celebration concert Friday night (December 31st, of course), the parallels between 1921 and 2021 were reason enough to dedicate the first half of the night’s festivities to the music of Gershwin, including two of his Greatest Hits: the 1924 “Rhapsody in Blue” and the 1928 tone poem “An American in Paris.”

The evening opened, appropriately, with an overture. Specifically, the overture to Gershwin’s 1930 musical “Girl Crazy,” which ran for 272 performances at Broadway’s Alvin Theater. Orchestrated by Robert Russell Bennett (a decent composer in his own right), this lively curtain raiser includes hits like “Embraceable You,” “But Not for Me,” and “I Got Rhythm,” which was a show stopper for the 22-year-old Ethel Merman. Denève and the band dug into it con brio, with a performance high on fun and finesse.

In his introduction, Denève promised Gershwin “with just a tiny French accent”—a promise on which he made good in both the “Rhapsody” and “An American in Paris,” with readings filled with panache and originality.

This was especially true of the “Rhapsody,” thanks to a fresh, imaginative take on the piano part by soloist Michelle Cann. When Kirill Gerstein was the soloist for the “Rhapsody” in 2014, (a performance recorded live and available on Spotify) he freely embellished the music in a '20s jazz style—as did the composer himself in the work's premiere. Cann imbued her performance with that same sense of freedom and improvisation but (as far as I could tell) without changing a single note of the printed score. Which is quite a remarkable accomplishment. Denève conducted with flair and the band played with true twenties zip.  The famous opening solo had a bluesy feel in the hands of Principal Clarinet Scott Andrews and Principal Trumpet Karin Bliznik, who brought a buoyant jazz age spirit to her playing throughout.

A performance like that often results in a standing ovation and an encore and we got both Friday night. The encore was a short (no repeats) and snappy piano four hands arrangement of Scott Joplin’s “The Cascades” (written for the 1904 World’s Fair) with two of the hands belonging to Maestro Denève.

Preceding the “Rhapsody” was an elegant and romantic “American in Paris.” Andrews and Bliznik had solid solos here again, as did Concertmaster David Halen and guest artist James Land on tuba. Done well, this is a work that never disappoints. The animated opening with its colorful evocation of the city's sidewalk cafes and bustling boulevards (complete with honking taxi horns in the percussion section) is a masterful bit of musical imagery. And the lyrical central section evokes not only the homesickness of the traveler but also the allure of Paris at night. Denève brought out some of the more piquant harmonies in the score—a reminder that the composer was, in his own words, writing “in typical French style, in the manner of Debussy and The Six.”

The second half of the concert opened with the first and last movements of the 1926 “Mississippi Suite” by Ferde Grofé, the gent who orchestrated Gershwin’s “Rhapsody.” Although not nearly as popular as Grofé’s “Grand Canyon Suite,” the “Mississippi Suite” is not without its charms, all of which came through clearly in Friday night’s performance. “Father of Waters,” the opening movement, captured the serene grandeur of Big Muddy’s headwaters in Minnesota, while “Mardi Gras” was a rousing closer, complete with a romantic theme that would later become the 1942 Frank Sinatra hit “Daybreak.”

Up next was a world premiere that also took its inspiration from the Mississippi, the “Voyageur Fantasy” for horn and orchestra by Stefan Freund, a Missouri-based  composer and founding member of the contemporary music ensemble Alarm Will Spound. The title refers to the French-Canadian trappers who were among Missouri’s earliest settlers. In comments from the podium, Denève revealed that the work’s two short movements are intended to reflect a day in the life of a voyageur, beginning with a mysterious opening depicting dawn on the river. That leads to a long, technically demanding cadenza followed by what sounds like a wild, alcohol-fueled and blues-infused dance that stretches both the instrument and player to their limits.

Principal Horn Roger Kaza seemed unfazed by those demands, combining a cool on-stage persona with protean technique. Rapid passages, leaps that cover the horn’s entire range, and what sounded like every conceivable form of hand muting were all handled with that deceptive sense of ease that marks the true virtuoso. Congratulations to Kaza, Denève, and the orchestra for a job well done.

The program concluded with a quartet of popular favorites: the Dick Hayman arrangements of “Meet Me in St. Louis” and “The St. Louis Blues March,” along with Rodgers and Hammerstein’s “Do-Re-Mi” sung with her usual élan by Debby Lennon and preceded by some comic byplay in which Denève displayed his skill at solfeggio (singing with the sol-fa syllables).

And, of course, there was “Auld Lang Syne” as a sing-along. We all sounded a bit muffled by our masks, but the sentiment was undiluted.

At the start of the evening, Maestro Denève expressed the hope that the 2020s would bring an explosion of creativity similar to the one that occurred a century ago. I hope he’s right, and I’ll happily raise a glass of something bubbly to toast the idea.

Next at Powell Hall: The regular season resumes as Stéphane Denève conducts the SLSO and piano soloist Shai Wosner (substituting for the originally scheduled Lars Vogt) in the Symphony No. 1 by Brahms, Beethoven’s Piano Concerto No. 1, and Detlev Glanert’s 2012 “Brahms-Fantasie.” Performances are Friday at 10:30 am and Saturday at 8 pm, January 7 and 8  at Powell Symphony Hall in Grand Center.