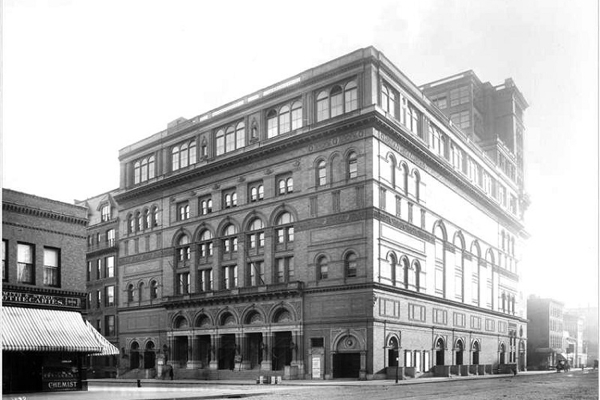 This weekend (April 8-10), Assistant Conductor Stephanie Childress takes the podium of the St. Louis Symphony Orchestra (SLSO) to conduct an eclectic mix of works by Sebelius, Dvořák, and contemporary American composer Jessie Montgomery. Montgomery’s “Rounds for Piano and String Orchestra” is the newly minted work, having had its world premiere just a few weeks ago on March 27, 2022, with the Hilton head orchestra of South Carolina. Sibelius’s 1902 revision of his 1893 tone poem “En Saga” has not been heard on the Powell Hall stage since 2012, But Dvořák‘s 1893 Symphony No. 9 ("From the New World") is a perennial favorite, last heard here in January 2017 in a splendid performance by former music Director David Robertson.

As I have noted in the past, the music of Sibelius is deeply informed by the composer’s love of his native Finland’s forests and its striking if forbidding landscapes. You can certainly hear that in “En Saga.” It opens with biting northern winds evoked by swirling strings while the woodwinds sing a mournful, folk-like melody. The lower voices of the orchestra join with the percussion section in a dramatic central episode with a noble theme that is quintessential Sebelius. A long lament for solo clarinet and strings brings the work to a mysterious close.

Although the title and the music itself both suggest a narrative thread, Sibelius would later write that “En Saga” was “the expression of a state of mind.” “I had undergone a number of painful experiences at the time,” he continued, “and in no other work have I revealed myself so completely. It is for this reason that I find all literary explanations quite alien."

“Literary explanations” were, on the other hand, part of the core inspiration for Montgomery’s “Rounds for Piano and Strings,” a co-commission by the SLSO, the Art of the Piano Foundation (for Awadagin Pratt, who is this weekend’s soloist), and eight other American orchestras. “Rounds for solo piano and string orchestra,” she writes, “is inspired by the imagery and themes from T.S. Eliot’s epic poem Four Quartets.” In particular, she cites these lines from the first poem, “Burnt Norton”:

Montgomery draws on other sources as well, but rather than simply quoting her at length, I recommend reading her program notes at the publisher’s web site, which include her Erik Satie-esque performance notes from the score. I'd love to give you my own impressions of it, but the piece is so new that there are no recordings available anywhere. And, yes, that includes that bottomless well of copyright violations known as YouTube.

Closing the concerts is the Symphony No. 9 in E minor, op. 95, (“From the New World”) by Antonín Dvořák. The Czech master wrote it during a visit to America in the early 1890s, and while he never explicitly quotes any American folk material, there's still something about this music that strongly suggests America. From the flute theme in the first movement that seems to echo "Swing Low, Sweet Chariot," to the second movement Largo that has (at least for me) always evoked the majestic solitude of the plains (Dvořák said he wrote it after reading Longfellow's "Hiawatha"), to the "bluesy" flatted seventh chords of the finale, Dvořák "New World" symphony just shouts "USA"—even if it does so with a strong Czech accent.

Some critics have complained of the symphony's structural weaknesses and its episodic nature. In his book "Nineteenth-Century Romanticism in Music," for example, British musicologist Rey M. Longyear disses the composer's "labored attempts" at cyclic form I'm sorry but I need to go out come on come out that's why I askedand dismisses it as "one of [Dvořák's] weaker works."

English composer/conductor Julius Harrison, on the other hand, had a more balanced view in an essay published posthumously in "The Symphony" (Penguin Books, 1967). Noting that that "only a cynic can be deaf to the call of this warm-blooded music, so spontaneous it all sounds… The symphony was in fact a heartfelt greeting from the New World to [Dvořák's] friends parted from him by circumstances and the ocean." Alas, he also found it necessary to write that the Ninth "has come in for considerable criticism as being mainly a succession of enchanting and virile tunes loosely strung together in patchwork style, presided over or helped out by a strongly rhythmic phrase bundled into each movement whenever Dvořák found himself wondering how best to proceed."

I beg to differ. As conductor Joshua Wallerstein has pointed out in the episode of his “Sticky Notes” podcast dedicated to the Dvorak ninth Symphony, that “strongly rhythmic phrase” is not just something tossed in whenever Dvorak wasn’t sure what to do. In combination with the pentatonic scale on which it’s based, it is in fact the tiny acorn from which the mighty oak of the symphony grows. It's embedded in every single melodic idea (starting with the main theme of the first movement) and is the major unifying factor of the symphony. “[T]his piece is not only a heavily traditional symphony,” observes Wallerstein, “it’s practically through composed from its very first notes.”

This tremendously appealing piece is one of the first classical works I ever encountered, and I've never lost my affection for it. If you've never heard it before, I'll bet it will strike you the same way.

The Essentials: Stephanie Childress conducts the SLSO IN Sibelius’s “En Saga,” Jessie Montgomery’s “Rounds for Piano and String Orchestra” with soloist Awadagin Pratt, and Dvořák’s Symphony No. 9, "From the New World." Performances take place Friday at 7:30 pm, and Saturday at 8 pm, and Sunday at 3 pm, April 8-10 at Powell Hall in Grand Center. The Saturday night concert will be broadcast live over the air and on the Internet on St. Louis Public Radio and Classic 107.3.