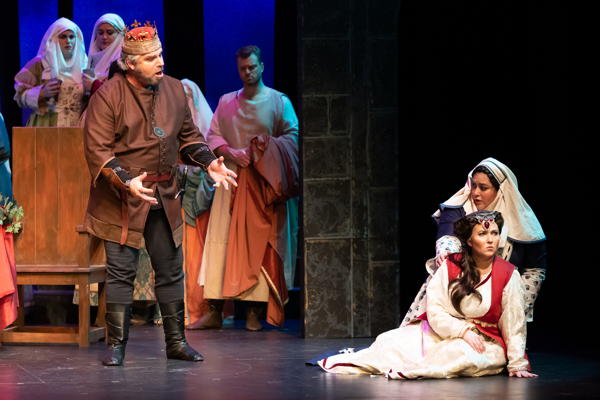 “Verdi adored Shakespeare,” writes Garry Wills in his invaluable “Verdi’s Shakespeare: Men of the Theater,” and goes on to note that the composer briefly considered operatic treatments of “The Tempest,” “Hamlet,” and “Romeo and Juliet.” He considered “King Lear” more seriously, but ultimately left us with only three operas based on the Bard: “Otello” (1887), “Falstaff” (1893), and “Macbeth” (1847, revised in 1865).

Union Avenue Opera gave us a solid “Falstaff” last August, but it has been a good seven years since local audiences have had a chance to see “Macbeth” (in an English translation at Opera Theatre). That made Winter Opera’s admirable production last Friday and Sunday (January 20 and 22) all the more welcome. Smartly staged and powerfully sung, its only serious flaw was the fact that it ran only two performances and that, by the time you read this, it will no longer be possible for you to see it. I don’t know whether or not Verdi would have adored it, but I think he would have been happy to see his work treated with such respect.

Audiences who know their Shakespeare probably noticed that Francesco Maria Piave and Andrea Maffei’s libretto follows the bare bones of Shakespeare's original, although the story has been considerably streamlined and many secondary characters have been eliminated. But the big moments are still there: the scenes with the witches, Lady Macbeth's "letter" and sleepwalking scenes, Macbeth's "dagger" monologue, and of course, the banquet with Banquo's ghost. And in Verdi's hands, they form the basis for very powerful theatrical moments.

Stage Director John Stephens wisely decided to eschew the kind of gimmicky attempts at updating that have plagued so many productions of established operatic classics in recent decades. “Our production,” said Stephens in an interview last week, is set circa 1100 with magnificent period costumes.” And, in fact, Scott Loebl’s sparse sets, Amy Hopkins’s costumes, and Michael Sullivan’s lighting all set the appropriately Gothic atmosphere.

All this would have been for naught without a cast of strong singing actors. Verdi was, first and foremost, a man of the theatre. “Verdi,” writes Wills, “was determined to break away from ‘the tyranny of good singing,’ from the empty beauties of bel canto.” He wanted gritty, realistic characters for “Macbeth” and Winter Opera’s cast delivered them.

Baritone Michael Nansel, whose resume includes both musical theatre as well as opera, was a big, commanding Macbeth. Verdi wanted his Macbeth to display overweening ambition and crippling self-doubt. Nansel did that, backed up by a powerful voice. Bass Nathan Whitson was an equally compelling Banquo. Both had potent stage presence, making their Act I duettino (in which Macbeth’s growing royal aspirations are contrasted with Banquo’s unease about them) truly compelling.

Unlike Shakespeare, Verdi saw Lady Macbeth as the prime mover in the action who “dominates and controls everything.” So while her role isn’t large, it’s critical, requiring either a soprano or mezzo (some of it lies quite low) with a wide vocal and dramatic range. Soprano Whitney Myers has both, and was equally convincing in both her triumphant Act II aria “La luce langue,” in which she celebrates the “voluttà del soglio” (the “rapture of the throne”), and her hollow-eyed Act IV sleepwalking/mad scene.

“Macbeth” is an opera of low voices, matching its dark themes. The only tenor role of any consequence is that of Macduff, but his one aria—“Ah, la paterna mano” (Ah, the paternal hand”), in which he laments the slaughter of his family at the hands of Macbeth’s thugs—can be heartbreaking if done properly. Jonathan Kaufman employed his heroic tenor to great effect here and was warmly applauded when we saw him on Sunday.

Finally, let us not neglect the witches. Verdi certainly didn’t, seeing them as a powerful malign presence. The score calls for three separate groups of six each—a mob which, on the Kirkwood Performing Arts Center’s stage, would leave little room for anything else. Winter Opera gave us three groups of three, which was not only more manageable but also allowed each which to have her own unique personality, from seductive to deranged. I have noted in the past the Winter Opera’s choristers generally avoid the trap of coming across as (in Anna Russell’s words) “homogenous—as in milk.” Both the male and female singers were consistent in projecting vocal harmony without neglecting dramatic diversity.

Finally, Edward Benyas conducted the small but solid orchestra in an excellent reading of the score, assisted by the warm acoustics of the Kirkwood theatre.

Granted, there were a couple of technical snafus Sunday, one of which left a hapless stagehand frantically dumping dry ice into the witches’ cauldron after the curtain rose on Act III. But that, my friends, is show biz.  The infamous “trampoline Tosca” of Dame Eva Turner comes immediately to mind as an example. But the bottom line is that Winter Opera’s “Macbeth” was a production of which General Director Gina Galati and her crew can be proud.