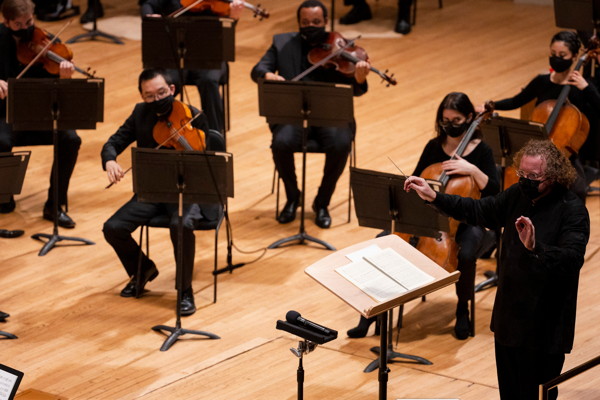 The COVID-19 pandemic closed Powell Hall and cancelled the rest of the 2020 season for the St. Louis Symphony Orchestra (SLSO), but after consultation with epidemiologists at Washington U. and changes in the way concerts are handled, the orchestra started a new fall season on October 15th.

Tickets are strictly limited to 150 seats per concert—a little over 5 percent of Powell's capacity—concerts are shorter, the bar is closed, masks are required, and the orchestra is smaller and physically distanced, but the music is still great.

Ms. Washington's "Middleground" for string quartet combines echoes of country fiddle tunes with the "high lonesome" sound of the hills to produce music that feels both traditional and contemporary at the same time. The composer says it's meant to evoke images of the small midwest towns of her childhood, and I think it succeeds beautifully.

The performance by SLSO violinists Kristin Ahlstrom and Ann Fink, violist Shannon Williams, and cellist Bjorn Rahneim truly rocked in the danceable opening and closing sections, and Ms. Williams's elegaic solo in the quieter central section was just perfect. The instrumental balance was good and individual lines were very clear, despite the very live acoustics created by putting a small audience in that big space.

Tchaikovsky's popular "Souvenir de Florence" for string sextet recalls not the composer's actual home but rather his winter home away from home in sunny Italy. "Souvenir" was actually written in Russia but Italy and Florence were still on Tchaikovsky's mind. You can hear that most strongly in the lyrical second movement. The rest of it sounds more Russian than Italian, especially in the last two movements, but with melodies this irresistible, who cares?

The quartet was joined by Michael Casimir on viola and Melissa Brooks on cello for the "Souvenir" and once again the everything was expertly played, with a wide emotional range and some outstanding solo work, especially from Mr. Casimir's rich, smooth-sounding viola. The dramatic coda of the first movement had real fire, the second movement sang, and the last two movements were brimming with energy. It all got a standing ovation from the small but enthusiastic audience.

The Washington/Tchaikovsky pairing will be performed again on Friday, November 6th at 11 am. The other five concerts continue in rotating repertory through November 8th at Powell Hall in Grand Center. Note that tickets can only be ordered by calling the SLSO box office at 314-524-1700. Only two tickets can be purchased per household.