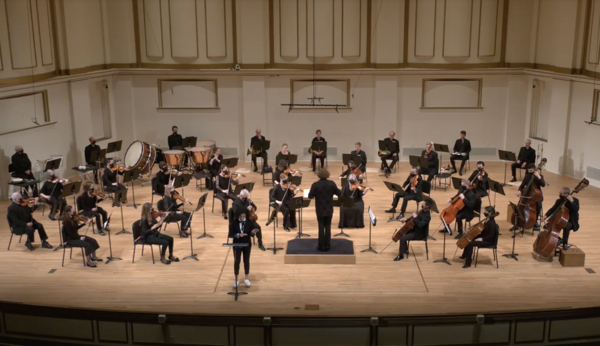 Available through September 25th, the latest digital release from the St. Louis Symphony Orchestra (SLSO) is from a series of concerts originally performed live this past Mother's Day weekend (May 7th through 9th) and reviewed by me back then.  On our way home from the May 8th performance, my wife commented that there was a noticeable warmth to Music Director Stéphane Denève's conducting. I’d say there’s also an affection for both the music and musicians that is well-nigh irresistible.

[Find out more about the music with my symphony preview of the original concert.]

You can hear those qualities in the pair of works that open this concert, picked specifically in honor of Mother's Day: settings of the poem "Songs My Mother Taught Me" by Antonín Dvořák and Charles Ives.

Written for voice and piano, the songs are heard here in arrangements by Michi Wiancko for string orchestra, with a single wind instrument taking the vocal line. Principal Clarinet Scott Andrews is the soloist in the Dvořák and Associate Principal Flute Andrea Kaplan in the surprisingly sentimental Ives. Both use their instruments to sing with a kindheartedness that is a perfect match for the music.

In the original live performance, the placement of Andrews and Kaplan towards the rear of the stage occasionally allowed the accompaniment to overwhelm them. The video overcomes that with a sound balance that makes them more clearly heard (despite the overall lack of audible stereo separation), as well as with close-up shots that allows you to see them playing in a way that could never be achieved in the concert hall. Alicia Revé Like (the narrator for "Peter and the Wolf") reads the English translation of the simple, sentimental poem in between the two performances, which is a nice touch.

Next is that venerable favorite, Prokofiev’s “Peter and the Wolf,” which has made regular appearances in SLSO programs since 1939, only three years after its first performance by the Moscow Philharmonic. Like’s take on the role of the narrator is a perfect balance of theatricality and simplicity—fun to watch without drawing focus from the many wonderful solo performances by the members of the orchestra. Here, again, the video makes it possible to see each soloist at work with a clarity you can't get any other way—and to get a better look at Like's entertaining performance as well.

Speaking of the soloists, here’s a shout-out to Kaplan’s virtuoso performance as the little bird, with all the rapid “flighty” passages delivered with assurance. Percussionists Alan Stewart, Tom Stubbs, and Will James are particularly fearsome as the hunters, Andrews is a sinuous cat, Principal Bassoon Andrew Cuneo a comically pompous grandfather, and Principal Oboe Jelena Dirks an elegant and, in the end, somewhat mournful duck.

Denève’s interpretation shows his usual fine sense of balance and ability to bring out some of the more interesting details of the score, including Prokofiev’s periodic dips into dissonance. In his introduction to the video, Denève describes the work as being "very dear to me..a lesson of creativity, courage, and freedom for listeners of every generation." That affection for the work is both visible and audible here.

Concluding the festivities is the suite Stravinsky prepared in 1922 from the score for his 1920 ballet “Pulcinella.” The suite takes a collection of tunes by the short-lived (1710-1736) Italian Baroque composer Giovanni Battista Pergolesi (along with a few ohters what were mistakenly attributed to him at the time) and dresses them in the light, transparent style of Stravinsky’s early “Neoclassical” period.

Most of the performances I’ve heard in the past have given this music the kind of bright, nose-thumbing cheer associated with the ballet’s titular commedia dell’arte clown. In the program notes, though, Denève is quoted as describing the suite as “such tender and charming music,” so it’s no surprise that his approach  more on the lyrical side.

Which, as it turns out, works just fine. The wider range of tempi allows movements like the opening Sinfonia to really breathe and makes energetic movements such as the Tarantella-Toccata and the Vivo (with its comic solo delivered with appropriate swagger Principal Trombone Timothy Myers) that much more exhilarating. Denève insures that the many solos can be clearly heard while still maintaining a cohesive ensemble sound.

There is, in short, much to love in this program.

The SLSO Mother's Day program is available on demand through September 25th at the SLSO web site. You can also watch the video version of the concert from the week before the Mother's Day series there through September 4th, along with information on the orchestra's fall series of live concerts, which begins with a special preview concert on September 19th.